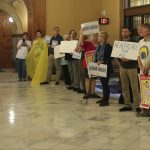 Members of the Poor People's Campaign protest outside the Kansas Senate chamber in favor of Medicaid expansion, Wednesday, May 29, 2019, at the Statehouse in Topeka. Some of the protesters went to a Senate gallery to protest and nine of them were arrested.

TOPEKA — The rise of protests at the Statehouse has exposed a complex landscape where rules diverge from one floor to the next and sanctions are inconsistently applied by law enforcement.

Republican leaders in the Legislature, the Democratic governor’s administration and Capitol Police remain entangled in negotiations with the American Civil Liberties Union of Kansas over how to proceed, The Topeka Capital-Journal reports.

The discussions come after demonstrators with the Poor People’s Campaign, which is focused on array of social and economic issues, and those pushing for Medicaid expansion have been increasingly crossing paths with law enforcement over the past 18 months.

During lawmakers’ last scheduled day in session last May, protesters making a last ditch and ultimately unsuccessful effort to expand the state’s Medicaid health coverage grew so raucous that the Senate halted its work to clear the gallery and floor — and a Capitol Police officer required reporters to leave the chamber temporarily.

Weeks earlier, the ACLU filed a lawsuit after Capitol Police briefly detained three Kansas State University students who hung large banners demanding Medicaid expansion and told them they were banned from the building for a year. The ban was lifted the next day. The ACLU suit is challenging rules that require groups to obtain a legislative sponsor and an event permit for Statehouse demonstrations, and that prohibit hand-held signs and banners.

It isn’t clear what will happen the next time a rule-breaker defies orders.

“For us to proceed next session, we need to have assurance that the highway patrol will not be told to stand down based on politics,” said House Speaker Ron Ryckman, an Olathe Republican.

Ryckman and Senate President Susan Wagle, R-Wichita, expressed concerns with the ACLU lawsuit during a meeting in December of the Legislative Coordinating Council, the entity responsible for drafting administrative rules for the third, fourth and fifth floors of the Statehouse.

The rules set by the LCC conflicted with a policy rolled out in October by Gov. Laura Kelly’s administration, which has domain over the first and second floors. The new policy for the lower levels no longer restricts the use of signs or requires a legislator to sponsor an activity.

Republican leaders prefer to retain their administrative rule banning anyone from carrying a sign into the Statehouse.

“I think signs can be very dangerous,” Wagle said. “They can be thrown. They can be on poles. They can hurt people.”

The Rev. Sarah Oglesby-Dunegan, a Unitarian minister from Topeka who was involved in the Medicaid expansion protests, said it was “ridiculous” to suggest a sign is a security threat in a building where the concealed carrying of firearms is allowed.

Settlement talks in the lawsuit revolve around an agreement proposed by the ACLU to allow small handheld signs, a compromise on the need to find a legislative sponsor for a demonstration, and a formal written policy by police for banning people from the Statehouse.

“Some reaction obviously is appropriate if there’s a disruption of session,” said Lauren Bonds, legal director for ACLU of Kansas.

Oglesby-Dunegan said the possibility of ongoing protests would be determined by whether lawmakers move forward with a Medicaid expansion plan, as they have promised to do. She said she has “other interesting things” she could be doing, such as writing sermons.