Kansas state Sen. Richard Hilderbrand, left, R-Galena, makes a point during a debate on a bill that would legalize sports betting as Senate Vice President Jeff Longbine, R-Emporia, watches, Wednesday, Feb. 26, 2020, at the Statehouse in Topeka, Kan. The measure would allow four state-owned casinos to offer sports betting as a part of the Kansas Lottery. (AP Photo/John Hanna)

TOPEKA — Kansas lawmakers who want to legalize betting on sports events and allow online sales of lottery tickets are struggling to agree on the details and facing criticism that they’re being too generous toward companies already managing casinos for the state.

The state Senate gave first-round approval Wednesday to a sports betting bill less than month after the Kansas City Chiefs’ victory in professional football’s Super Bowl highlighted how many Kansas fans likely placed wagers on the team out of state or illegally. Senators hoped to take a final vote on the measure later Wednesday to determine whether it passes and goes to the House, where a committee is working on its own legislation.

The Senate’s bill would allow people to place bets on sports events through four state-owned casinos managed by private companies through contracts with the Kansas Lottery, and the casino companies could take wagers through computer or cellphone apps. The measure also would allow limited state lottery ticket sales online.

The bill’s supporters don’t expect sports betting to raise more than a few million dollars a year for the state, even if the annual amount wagered reaches $1 billion, because 95% would go back to players in the form of winnings. But 20 states have legalized sports betting, including Colorado, Illinois and Iowa.

“It certainly put us in a position where we can establish sports gaming in Kansas and pull, hopefully pull, wagers from a black market, off-shore, unregulated, untaxed market and bring it into Kansas under a regulated, safe market,” said Senate Vice President Jeff Longbine, an Emporia Republican who led supporters during a four-hour debate.

The House committee plans to have hearings next month on its rival proposal. Chairman John Barker, an Abilene Republican, said it would give the state a larger share of the sports betting revenue and would allow hundreds of retail stores that sell lottery tickets to accept simple bets on sports.

“We thought we would spread it out,” Barker said. “You could be able to go down and buy a lottery ticket and bet on the K-State-KU game, hopefully buy a loaf of bread and 10 gallons of gas or whatever and go home.”

There’s also the question of whether Kansas should try to revive long-closed dog and horse racing tracks. State law allows slot machines at the tracks, but critics say the state’s take is too high for them to be profitable. The Senate voted 18-17 against lowering the tax rate for a dog and horse racing park in Kansas City, Kansas.

The park is owned by billionaire casino mogul Phil Ruffin, a friend of President Donald Trump. The Wichita Eagle reported that in 2018, Senate President Susan Wagle, a Wichita Republican, listed Ruffin as a reference as she sought an ambassadorship, sending an email to a political operative 10 days after for a similar proposal. She voted for Wednesday’s proposal as well.

Democrats in the Senate complained that their chamber’s bill gave too much control over the sports betting to the companies managing the state’s casinos by not requiring separate sports-betting contracts with the lottery and letting the casino managers decide who provides computer or cellphone apps.

Some critics also found the casinos’ favored position galling because of restrictions the bill would place on online lottery ticket sales. About a dozen other states have some form of online lottery sales.

The Kansas Lottery couldn’t use any sound or visual effects simulating a slot machine, allow someone to play more than one game at a time or determine a winner in less than four minutes. The lottery estimates it could boost sales $3 million a year under the bill but by as much as $26 million if the provisions were less restrictive.

Sen. Tom Holland, a Baldwin City Democrat, said the bill is a “sucker bet” for the state when it’s likely to see more gambling addicts and other problems from expanded gambling.

“I’m not sure the benefits outweigh the societal costs,” Holland said during a break in the debate. 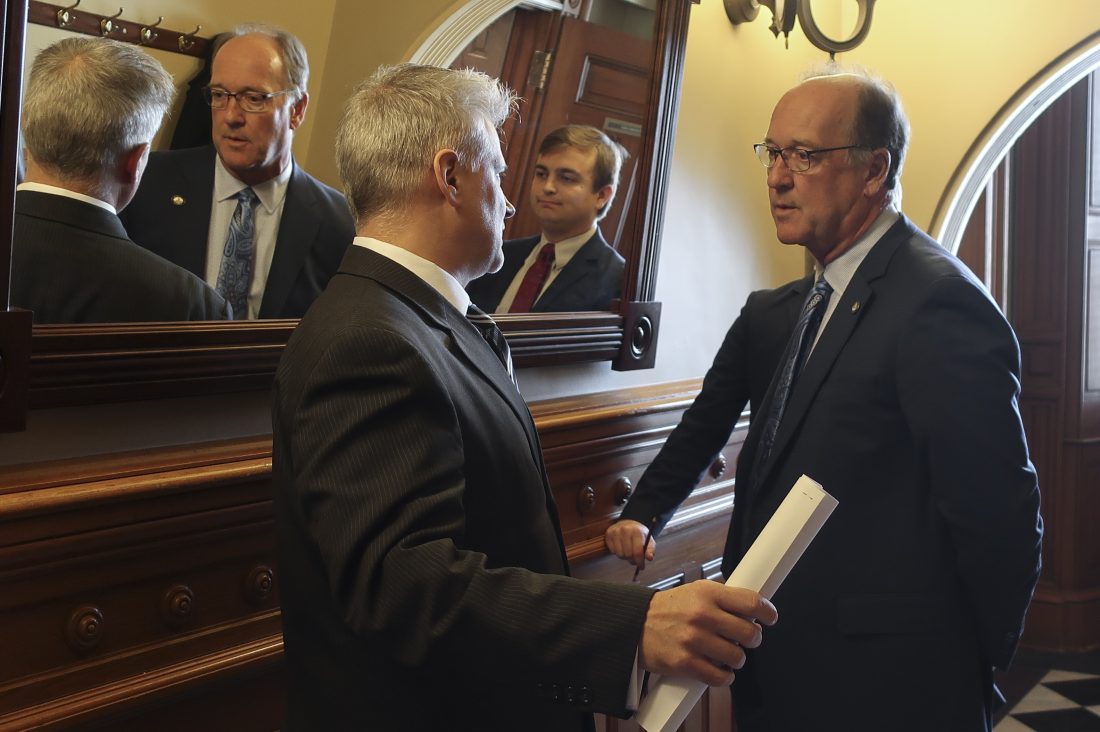 Tim Graham, left, a member of Kansas Gov. Laura Kelly’s staff, confers with Senate Vice President Jeff Longbine, right, R-Emporia, outside the Senate chamber ahead of a debate on legalizing betting on sports events, Wednesday, Feb. 26, 2020, at the Statehouse in Topeka, Kan. Pictured between them in the mirror is Michael Murray, Longbine’s chief of staff. (AP Photo/John Hanna)