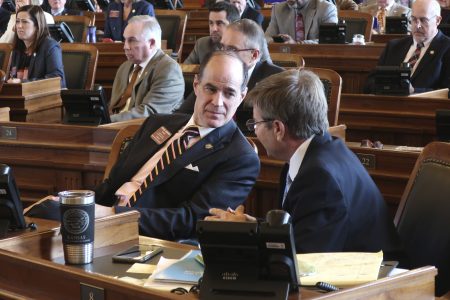 Kansas has seen tax collections beat expectations 31 of the past 32 months, dating back to June 2017, even as expectations have risen. Top Republicans believe a key reason is that some individuals and businesses are paying more in state income taxes because of changes in the federal tax code at the end of 2017.

The extra dollars pour into the treasury and bulk up the state’s cash reserves unless lawmakers and the governor decide this spring to spend them. The state began its current budget year in July with $1.1 billion in cash reserves — a little more than twice as much as what’s legally required.

Kelly has proposed using more than half of the state’s reserves to pay off bonds and other debts early. She also continues to argue that Kansas can’t risk returning to the budget shortfalls that followed a nationally notorious experiment in slashing state income taxes under then-GOP Gov. Sam Brownback in 2012 and 2013.

Bipartisan legislative majorities reversed most of the Brownback-era cuts in 2017, the year before Kelly was elected governor. The near-automatic surpluses in monthly tax collections date to the same month lawmakers repudiated Brownback’s policies.

Kelly spokeswoman Dena Sattler said lawmakers should wait for a council appointed by the governor to study the tax system to make its recommendations at the end of 2020, rather than pursue changes “that could potentially send Kansas right back into fiscal chaos.”

“Kansas needs a more thoughtful approach this time around,” Sattler said in an email Monday.

But unexpected individual and corporate tax revenues keep flowing into the state treasury. Revenues from those two sources are 3.3% ahead of expectations for the current budget year — and 9.2% higher than in the previous budget year.

“Returning some portion of those is more compelling,” said House Taxation Committee Chairman Steven Johnson, a Republican from western Kansas.

Kansas expected to collect nearly $666 million in revenues in January but collected more than $725 million. Since July 1, the state has collected $4.3 billion in taxes, when $4.2 billion was expected.

State officials have no good figure for what Republicans call the “windfall” from the federal tax changes, outside of a $60 million-a-year estimate for the burden faced by individual filers who previously could claim itemized deductions on their state returns but now cannot.

The federal changes championed by President Donald Trump generally cut income taxes but included policies that discourage people from claiming itemized deductions. Kansas law prevents individuals from itemizing on their state returns if they don’t itemize on their federal returns.

Republicans argue that hit middle-class families the hardest, because wealthy ones have high enough deductions to still itemize on federal returns. The bills vetoed by Kelly contained provisions to address the issue.

“She increased taxes when she didn’t have to increase taxes. We want to roll that back,” said House Majority Leader Dan Hawkins, a Wichita Republican. “She’s just being disingenuous in what she’s doing. It’s not fair at all.”

Top Republicans also have sought to shield corporations’ foreign income from taxation — and that’s been a main talking point for Democrats as they’ve attacked GOP plans. Most Democrats so far appear likely to stick with Kelly if she vetoes another GOP tax bill, making it harder for Republicans to find the two-thirds majorities in both chambers to override her action.

And House Minority Leader Tom Sawyer, a Wichita Democrat, pointed to an announcement last month by aircraft parts supplier Spirit Aerosystems announced it was laying off 2,800 employees, or more than 20% of its Kansas workforce, mostly in Wichita.