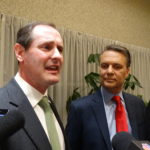 Tracey Mann, left, is Gov. Jeff Colyer's choice to be the next lieutenant governor of Kansas. He will be officially sworn into office during a ceremony at 4:30 p.m. Wednesday at the Statehouse.

Mann, who was lieutenant governor for former Gov. Jeff Colyer, announced his candidacy on Monday.

The announcement comes two days after the 1st District’s two-term incumbent, Republican Rep. Roger Marshall, announced he will run for the U.S. Senate held by Sen. Pat Roberts, who is not seeking re-election.

Mann, of Salina, said he is running to protect “Kansas values” and to take the state’s voice on agriculture to Congress. He said he is anti-abortion, pro-Second Amendment and supports President Donald Trump’s efforts to build a wall to curb illegal immigration.

The 1st District is one of the largest in the nation, encompassing 69 counties in western and central Kansas.