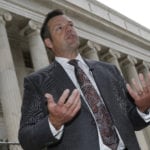 In this file photo from Aug. 23, 2016, Kansas Secretary of State Kris Kobach responds to questions outside the 10th U.S. Circuit Court of Appeals.

TOPEKA — Former Kansas Secretary of State Kris Kobach acknowledged that he failed to properly supervise his staff while representing himself in that role during federal court proceedings in a voter registration lawsuit, according to a diversion agreement reached with state regulators.

The Topeka Capital-Journal reports the confidential agreement resolves complaints made to the Kansas Disciplinary Administrator’s Office about Kobach’s conduct during litigation that successfully challenged a state law that had required people to show proof of U.S. citizenship to register to vote.

Details of the disciplinary office’s findings aren’t disclosed under Kansas rules, but a public notice of the agreement says Kobach stipulates he didn’t properly supervise lawyers and non-lawyers.

The disciplinary administrator’s office said there was no finding of dishonest conduct by Kobach.

Stan Hazlett, the state’s disciplinary administrator, said the diversion agreement was reached Oct. 10. The diversion is contingent upon undisclosed terms.

“Normally, a diversion agreement is confidential, but as you can see by the language in the public disclosure, Mr. Kobach’s counsel and this office agreed to a public disclosure of the disposition of this case,” Hazlett said.

Kobach is seeking the Republican nomination for an open U.S. Senate seat. He won the GOP nomination for governor in 2018, losing to Democrat Laura Kelly in the general election.

“As the office of the disciplinary administrator stated, there was no finding of dishonest conduct on the part of Mr. Kobach,” said Danedri Herbert, Kobach’s former spokeswoman. “That was the central allegation of the complaint, which was obviously politically motivated.”

Complaints were filed by Topeka activist Keri Strahler and others over Kobach’s conduct in the court battle with the American Civil Liberties Union.

A federal judge fined Kobach $1,000 for misleading the court about documents he carried into a meeting with then President-elect Donald Trump. Kobach paid that fine with the credit card of a staff member who was deployed to Ukraine with the Oklahoma Army National Guard.

Kobach was found in contempt again last year for failing to comply with court orders that required county election officers to send postcards notifying prospective voters they could participate in elections even if they failed to provide proof of citizenship when they registered. Kobach and his staff did not relay that to the counties.

The judge ordered Kobach to pay the ACLU $26,000 in legal fees as punishment for his “contemptuous behavior” during a voting rights case.

U.S. District Judge Julie Robinson harshly criticized Kobach and his assistants for failing to follow court rules during the litigation in which she struck down the state law as unconstitutional. She also ordered Kobach to take extra legal education as a sanction.

ACLU of Kansas legal director Lauren Bonds said her group views diversion agreements as “a positive tool for prosecutors and option for violators.”