Kansas secretary of commerce: ‘We need to crow loudly about why Kansas is a great place to live’ 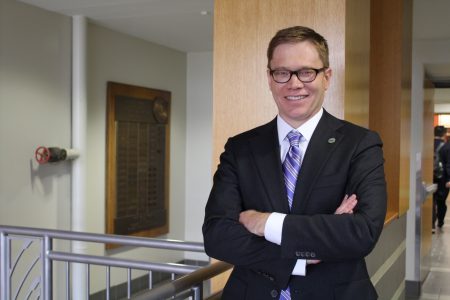 Kansas Secretary of Commerce David Toland was at KU on Thursday, Oct. 24, 2019, to speak at the Kansas Economic Policy Conference.

Secretary of Commerce David Toland, speaking at the University of Kansas, following a lecture some called “a funeral of rural Kansas,” touted Lawrence as a model community for the state.

Kansas State University professor Matthew Sanderson began Thursday’s Kansas Economic Policy Conference with the lecture titled “Kansas Population Trends: Where Are We Going?,” in which he highlighted rural population loss and the aging population in Kansas.

But Toland, who just started his term in April, is hopeful that the Department of Commerce’s developing strategic plan, as well as its efforts to brand the state in a way that will attract businesses, families and workers, will bolster Kansas’ economy in both the urban and rural sectors. And in an interview after his lecture, Toland said Lawrence was a model community for the state.

“Lawrence is a community that the state can showcase as an example of the high quality of life that we have in the state. If you take a business prospect to Mass St., they’re invariably going to have a positive impression,” Toland said. “I think it’s one of a number of model communities that we have that can be part of our strategy as we develop a new marketing and branding campaign for the state.”

The Department of Commerce is developing its first strategic plan since 1986. The new plan, called the Kansas Framework for Growth, is set to be finished in the first quarter of 2020. Currently, Kansans can take a survey on KansasGrowth.com to provide feedback on what they believe the state’s growth issues are and how best to address them.

Toland also said in the upcoming legislative session it would be a priority of his to get STAR bonds and the Angel Investor Tax Credit, both of which are up for renewal, through the Legislature.

STAR bonds were designed to finance commercial, entertainment and tourism areas and to repay the debt with the local and state sales tax revenues produced by the developments.

Toland said the 20 STAR bond projects in the history of the program “have all been sound and most of them pay off early.”

But critics say the tax money is going to investments that they don’t see as successful — for example, the Museum at Prairie Fire or Heartland Motorsports Park — instead of to sectors such as health care or education. The Museum at Prairie Fire, the Topeka Capital-Journal reports, operated at a loss of $2 million in 2015 and 2016.

The Kansas City Star reports that the bond projects didn’t deliver what they promised. Of six projects examined, revenues were short of their projections by $41.1 million.

Toland does hope to make changes regarding STAR bonds, including that feasibility studies be conducted through a firm hired by the Department of Commerce, not by the developer, and that noncontiguous districts be disallowed.

“So that would be that you’ve got the attraction in one place but the revenue generator in another,” he said. “That’s not what was intended with the program and that’s something I’m opposed to and Gov. (Laura) Kelly is opposed to as well.”

He also said he would “like to see more projects in nonmetropolitan areas.”

“I think that could really be one of the tools that can help support growth in rural Kansas,” he said.

One of the biggest challenges facing the state is retaining 22- to 30-year-olds, Toland said. Kansas needs to be more vocal about the opportunities available to young people in the state, and Kansas is “modest to a fault,” he said.

“There’s a lot that’s good about modesty, but when we’re in a competitive environment for recruiting companies, for recruiting talent, for recruiting families, we can’t be modest,” he said. “We need to crow loudly about why Kansas is a great place to live, work, start your business, visit. It’s the whole picture.”