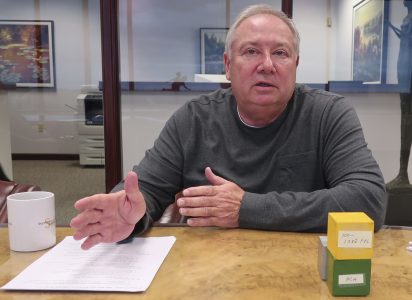 OVERLAND PARK, Kan. (AP) — A Republican leader spearheading an effort to pass a GOP plan for expanding Medicaid in Kansas has drafted a proposal that is likely to upset conservatives because it would increase tobacco taxes and does not include a work requirement for program participants.

The proposal from Kansas Senate Majority Leader Jim Denning also differs significantly from an expansion plan backed by Gov. Laura Kelly and fellow Democrats. It contains provisions designed to keep some working-class Kansans in private health plans, rather than having them receive state Medicaid coverage, as plans favored by Democrats would.

The plan outlined by Denning, a Kansas City-area Republican, is designed not only to expand the state’s $3.8 billion-a-year Medicaid program but lower premiums paid by Kansas consumers who buy their insurance through an online federal marketplace set up under the 2010 federal Affordable Care Act. New tobacco tax dollars would be used for that purpose.

Denning and other top Republican senators blocked a Medicaid expansion plan favored by Kelly earlier this year, arguing that it could prove too costly to the state and that lawmakers needed to take more time to get the details right. Kelly made expanding Medicaid to as many as 150,000 more Kansas residents a key promise in her successful campaign for governor last year.

The proposal from Denning would increase the state’s cigarette tax by $1 per pack, to $2.29, and increase its tax on 5 cents-per milliliter tax on vaping products, though he hasn’t yet specified an amount. He provided details of his plan during an Associated Press interview in his hometown of Overland Park, and a Senate committee plans to review them Tuesday and Wednesday at the Statehouse.

“Our simple goal is to give as many Kansans health care coverage as we can, in the Medicaid market and the non-Medicaid market,” he said.

Under Denning’s plan, the state would ask Medicaid participants whether they are employed and, if they are not, what issues, such as a lack of a high school diploma or the need to care for young children, keep them from working, so the state can address them. But it’s not a requirement that Medicaid participants be employed or undergo job training.

Kelly and many backers of Medicaid expansion argue that a work requirement would be expensive to administer and would only to keep people from receiving coverage. A federal judge in Washington has blocked work requirements in Arkansas, Kentucky and New Hampshire.

But some Republicans, particularly conservatives, see a work requirement as crucial.

“A Republican plan pretty much has to have a strong work requirement,” said House Majority Leader Dan Hawkins, a Wichita Republican. “If you really want to give people a hand up and not a handout, you get them to where they’re self-sufficient, to where they can support themselves instead of being on government assistance.”

Hawkins also said he believes a tax increase is a “non-starter.”

Medicaid covers about 342,000 low-income, elderly and disabled Kansas residents, but non-disabled adults without children don’t qualify, and adults with children must have incomes well below the poverty level to be eligible for coverage.

Three dozen states have expanded Medicaid or seen voters approve ballot initiatives for expansion. The Affordable Care Act encouraged expansion by promising states that the federal government would pick up the bulk of the extra cost, 90% for Kansas. The idea has bipartisan support in Kansas, but conservative GOP leaders have blocked it.

Expansion backers have proposed extending Medicaid coverage to Kansas residents earning up to 138% of the federal poverty level, or $29,435 for a family of three.

“I think that we should try to cover as many uninsured people as we possibly can,” said Senate Minority Leader Anthony Hensley, a Topeka Democrat.

Denning’s plan would allow such an expansion but would first require the state to ask the federal government for permission to try a different approach for residents whose incomes are above the federal poverty level, or $21,330 for a family of three. Denning wants to use tobacco-tax revenues for a program that would push down premiums on the online marketplace, so that the coverage is more affordable.