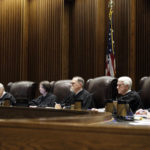 Justices listen to arguments during a school funding hearing before the Kansas Supreme Court in Topeka, Kan., Tuesday, May 22, 2018. (AP Photo/Orlin Wagner, Pool)

KANSAS CITY, KAN. — The Kansas Supreme Court has upheld a 34-year-old rule that prohibits victims injured by drunken drivers from suing the bars that served them.

The high court’s ruling on Friday came in the case of Jeff Kudlacik, who was placed in a medically induced coma and faced months of rehabilitation following a car accident involving a drunken driver in 2015, KCUR-FM reported.

Kudlacik was driving in Overland Park when a Ford Fusion ran a red light at 70 mph and slammed into his sedan, slicing it in half and leaving Kudlacik with compound fractures in both of his femurs, a punctured lung and nine broken ribs.

The driver who hit Kudlacik, Michael Smith, had a blood alcohol content of nearly 0.18, which is more than twice the legal limit in Kansas.

Smith eventually pleaded guilty to aggravated battery while driving under the influence and was sentenced to more than two years in prison.

Kudlacik sued the two bars that served Smith before the accident. According to court records, Smith had eight to 10 alcoholic drinks at Johnny’s Tavern in Shawnee over about four-and-a-half hours, and one beer at Barley’s Brewhaus in Overland Park.

A Johnson County judge dismissed the case and the Kansas Court of Appeals upheld the ruling.

Justice Dan Biles said the state Supreme Court was bound by a 1985 case that found that Kansas didn’t have a law allowing victims of drunken driving accidents to hold alcohol vendors legally accountable for injuries caused by their patrons.

Kansas is among seven states without such a law, and the high court said it would be up to the Legislature to change that.

Kansas City attorney David Morantz, who represented Kudlacik, said they knew the odds of getting the law changed were slim. Morantz said Kudlacik plans to take the issue to state lawmakers.