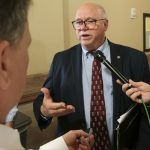 In this May 4, 2019 photo, Kansas Interim Corrections Secretary Roger Werholtz speaks with reporters about budget issues, at the Statehouse in Topeka, Kansas. Werholtz says he is worried that strings attached to extra funds for the state prisons system will prevent it from addressing its problems quickly enough. (AP Photo/John Hanna)

TOPEKA — A plan for fixing problems in the troubled Kansas prison system that could have created bipartisan harmony has instead inspired finger pointing and prompted complaints that the Republican-controlled Legislature botched pieces of the next state budget.

Democratic Gov. Laura Kelly and Republican legislators agreed that the state Department of Corrections needed extra funds to boost employees’ pay, deal with inmate crowding and address other issues. They also agreed on a figure: almost $36 million, or an extra 8.8% for the budget year beginning in July.

However, the department, Kelly and her fellow Democrats are unhappy because of strings Republican legislators attached to the new funds.

One provision blocks the department’s plan to address staffing problems at a maximum-security state prison for men by temporarily closing a cell house and moving inmates to private prisons. Interim Corrections Secretary Roger Werholtz said another provision could thwart the department’s plans to create new space to house female inmates.

Also, to spend most of the new funds, the department must first have its plans reviewed and approved by the governor and eight top legislative leaders.

“It’s slowing down our ability to respond to the conditions that we’ve got,” Werholtz said during an Associated Press interview. “It can create some significant problems for us if we can’t get the money released quickly.”

Kansas has more than 10,000 inmates, slightly more than the capacity of its prisons, with continued population growth expected. It has been beset by staffing shortages and had four riots at three prisons from June 2017 through November 2018.

Werholtz initially received praise from GOP legislators for giving them a more complete picture of the department’s problems than his Republican-appointed predecessor. But some Republicans now worry that he’s resisting legislative oversight.

“We’re talking about 35 million taxpayer dollars,” said state Rep. J.R. Claeys, a central Kansas Republican and House budget committee member. “There has to be a level of oversight.”

GOP lawmakers added the stipulations during an impasse over the budget and Kelly’s unsuccessful attempt to pass a Medicaid expansion bill this year. Some Democrats saw the final version of the spending bill as a “revenge” budget.

“The money is pretty much there,” said Sen. Rick Billinger, a Republican from western Kansas involved in drafting the budget’s final version. “Justifying additional pay to increase staff and things like that are pretty easy to sell, I think.”

Kelly said Wednesday that she is “pretty confident” that her administration can work with the budget provisions but called the strings attached “unfortunate.”

“When you’re playing with people’s lives, you need to be a lot more careful,” she said during a brief interview.

The budget includes more than $16 million for the department to house 600 inmates in private prisons, though only a third of the money would be available immediately.

One provision prevents the Department of Corrections from temporarily closing one of its cell houses at its maximum-security prison outside El Dorado, about 30 miles northeast of Wichita, where riots occurred in June 2017 and July 2018.

The state declared an emergency there in February so it could lengthen employee shifts. Werholtz said the prison would close a cell house and move inmates to private prisons or county jails until it could hire the 35 to 40 new employees it needed to reopen the cell house.

Claeys questioned the wisdom of closing a cell house when the state’s prisons already are crowded and said boosting pay and aggressively recruiting new officers are the real answers.

The budget mandates a 15.9% pay increase for El Dorado’s officers, to boost their hourly wage above $18. Werholtz had proposed pay raises of up to 13% and said lawmakers didn’t provide enough money to go higher across the board, potentially creating morale problems later.

And the budget sets aside $3 million for “renovations” at the state’s juvenile corrections center in Topeka, to create separated space for 120 adult female inmates so the state women’s prison, also in Topeka, is not overcrowded.

However, Werholtz said the department wants to use the money to hire staff and set up a substance-abuse treatment program, not make extensive renovations. He said the budget’s wording might prevent him from spending the money on those items.