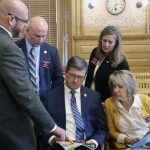 Topeka — Kansas lawmakers who support expanding Medicaid blocked passage of the next state budget twice on Friday in a high-stakes standoff designed to force the Legislature’s conservative Republican leaders to allow an expansion plan backed by Democratic Gov. Laura Kelly.

The Kansas House voted 63-61 against an $18.4 billion spending blueprint for the budget year that begins in July. House and Senate negotiators hashed out details Thursday night that were favorable for Kelly, fellow Democrats and moderate Republicans, with extra money for higher education, the prison system and state employee pay raises.

Democrats and moderate Republicans praised the proposed budget but saw the vote as their chance to pressure the Senate’s GOP leaders into relenting on plans to delay an expansion vote until next year.

But Republican leaders didn’t relent. The budget negotiators drafted a new, less generous spending blueprint — that removed extra funds for hospitals, whose association has advocated expansion — and put it to a vote in the House, only to see it fail by a wider margin, 81-42 against it.

“We’re going to do everything we can to get Medicaid expansion,” said House Minority Leader Tom Sawyer, a Wichita Democrat. “If we fail, we haven’t lost anything.”

The Senate has yet to debate a Medicaid expansion bill approved by the House in March, and top Republicans argue that lawmakers need more time to get the details right. Kelly has called it a “stall tactic” and is pushing lawmakers to go ahead now, so that expanded Medicaid health coverage can start in January.

The move thwarted top Republicans’ plans to wrap up lawmakers’ business for the year Friday, well ahead of the traditional 90-day mark on May 17.

GOP leaders wanted to pass a bill providing relief to individuals and businesses paying higher state income taxes because of changes in federal tax laws at the end of 2017, a smaller plan than one Kelly vetoed in March. The Senate approved it Thursday night, and supporters needed only a favorable House vote to send it to Kelly.

But lawmakers aren’t finished until they pass a budget because state government can’t operate past June or distribute $4 billion to its public schools without one. That created an opportunity for expansion supporters if they can hold up the spending blueprint long enough — but also a risk that spending they wanted would be at risk.

“I said exactly what was going to happen,” said Appropriations Committee Chairman Troy Waymaster, a conservative Republican and the House’s lead budget negotiator. “They were forewarned.”

Some expansion supporters accused GOP leaders of retaliation and even bullying. The change in funding for hospitals proved a provocative move. It removed $14 million in state funds, and it could have cost hospitals $250 million in federal funds.

Expansion advocates have been frustrated by their inability to get a bill out of committee in the Senate. The measure has bipartisan support in both chambers, but GOP conservatives who oppose it hold key leadership jobs. Top Republicans argue that an expansion plan is likely to prove more costly to the state than Kelly’s administration projects and want to consider alternatives, including work requirements.

About 15 expansion supporters dropped several thousand leaflets in the Statehouse rotunda Friday morning, each depicting a past-due hospital bill spattered with blood. The leaflets said hundreds of Kansas residents will die needlessly each year without expansion and each had the picture of a GOP senator on one side.

“When there’s extreme behavior coming out of the Senate leadership, that requires us to try to force their hand,” said Logan Stenseng, a 20-year-old University of Kansas public administration student who participated in the brief protest.

The protest didn’t move prominent Medicaid expansion opponents. Senate health committee Chairman Gene Suellentrop, a conservative Wichita Republican, noted that a leaflet with his photo contained another senator’s quote on the other side and he said the mismatch suggests the protesters “probably know very little about Medicaid expansion.”

“They need to go back to college,” Suellentrop said.

Advocates have pushed for Medicaid expansion in Kansas since 2012 and passed a bill in 2017, only to see it vetoed by then-Republican Gov. Sam Brownback. Democrats in North Carolina are hoping to include expansion in their state’s budget, but they face resistance from GOP legislative majorities and are suggesting that a veto by Cooper is ahead, with potentially protracted negotiations to follow. 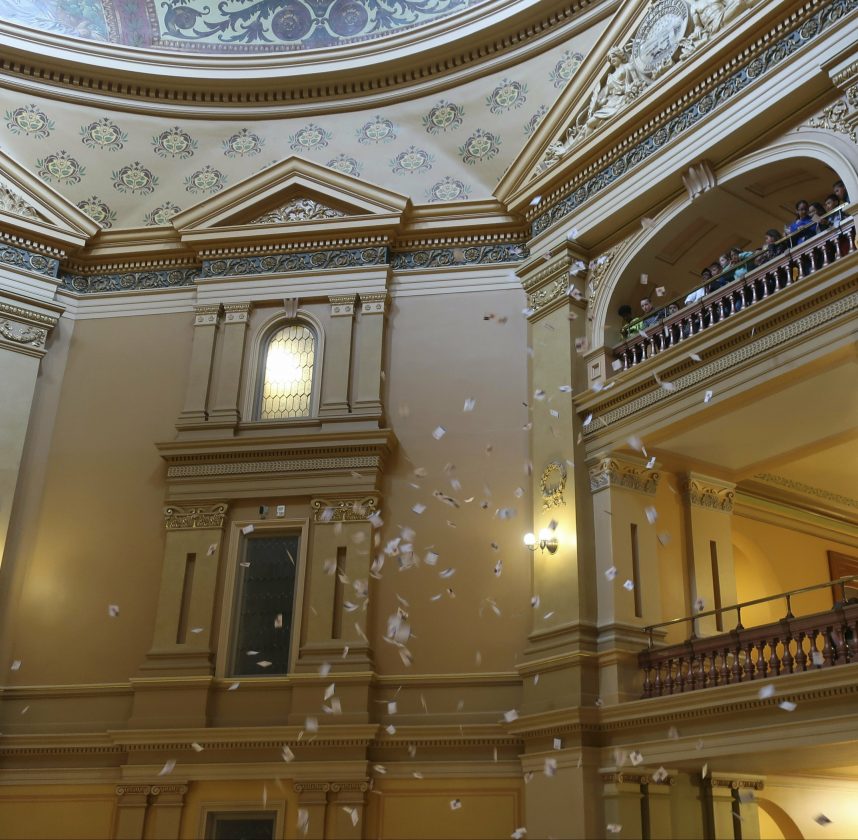 Several thousand leaflets drop from the fifth-floor rotunda at the Kansas Statehouse in a protest for Medicaid expansion, Friday, May 3, 2019, in Topeka, Kansas. About 15 protesters participated in dropping the leaflets, which depicted overdue hospital bills spattered with blood. Kansas legislators who support expanding Medicaid plan to try and block passage of the next state budget in hopes of forcing a vote on an expansion plan.(AP Photo/John Hanna) 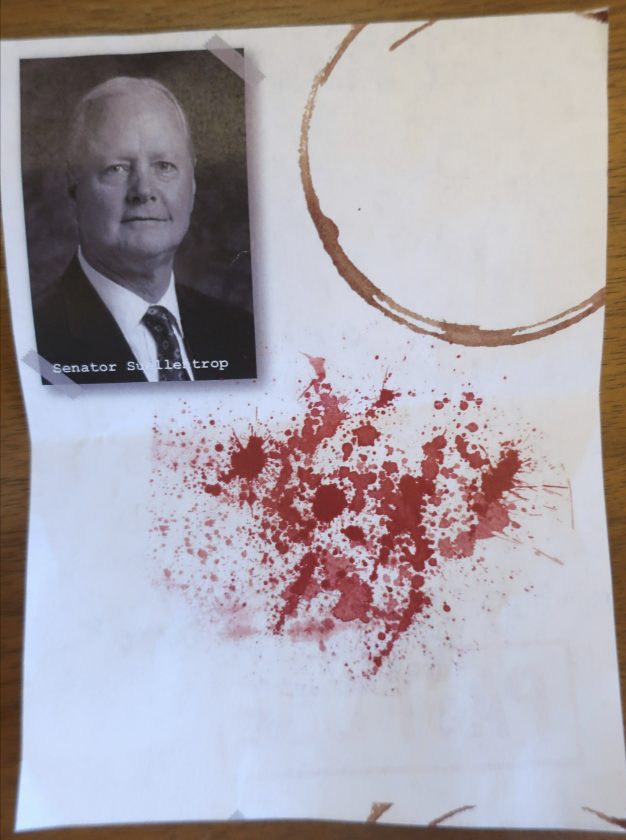 Pictured is one of several thousand leaflets dropped in the Statehouse rotunda in Topeka, Kansas, to protest in favor of Medicaid expansion Friday, May 3, 2019. This leaflets contains a picture of Senate health committee Chairman Gene Suellentrop, R-Wichita, who opposes expansion, and a spattering of blood. (AP Photo/John Hanna) 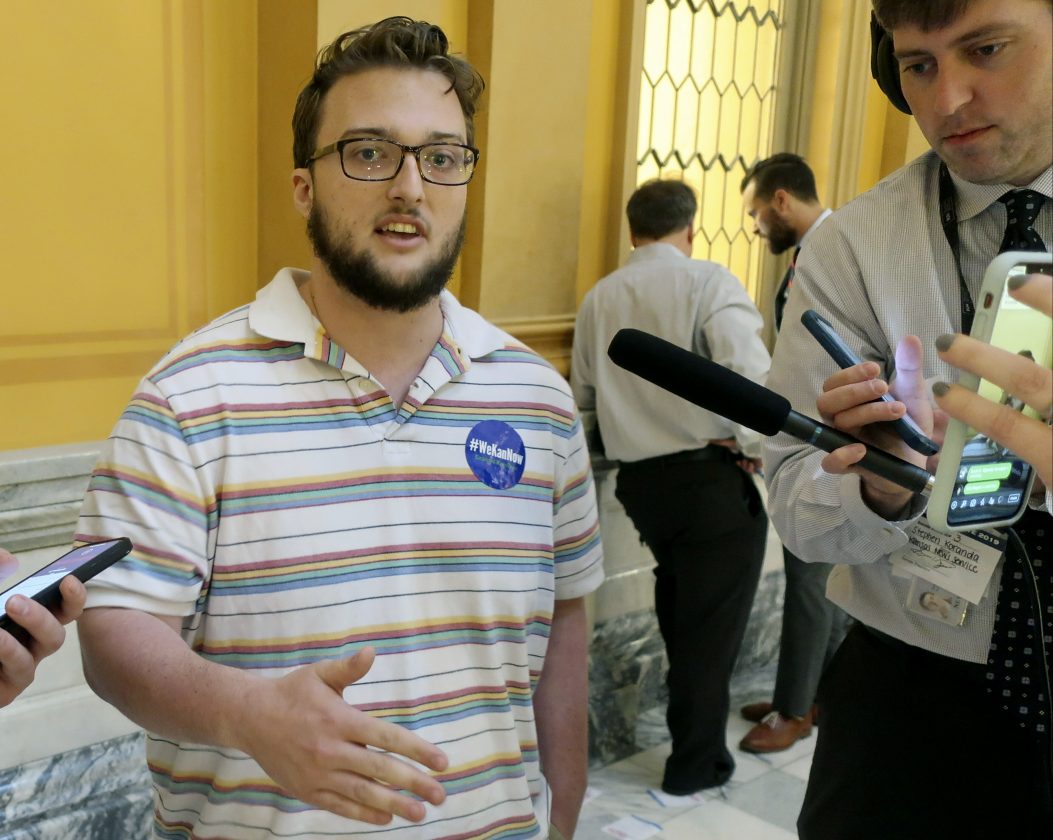 Logan Stenseng, a 20-year-old University of Kansas student, talks with reporters after participating in the dropping of several thousand leaflets in the Statehouse rotunda, Friday, May 3, 2019, in Topeka, Kansas. The protest was in favor of expanding Medicaid, with an expansion bill stuck in a Senate committee. (AP Photo/John Hanna) 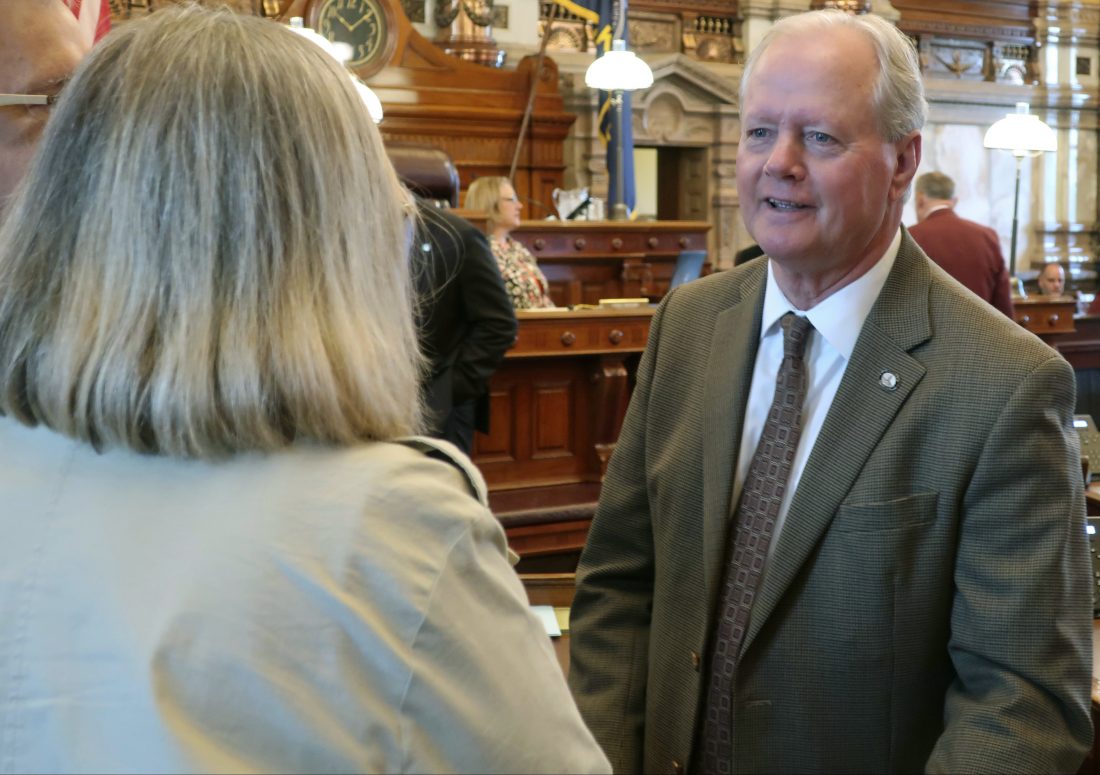 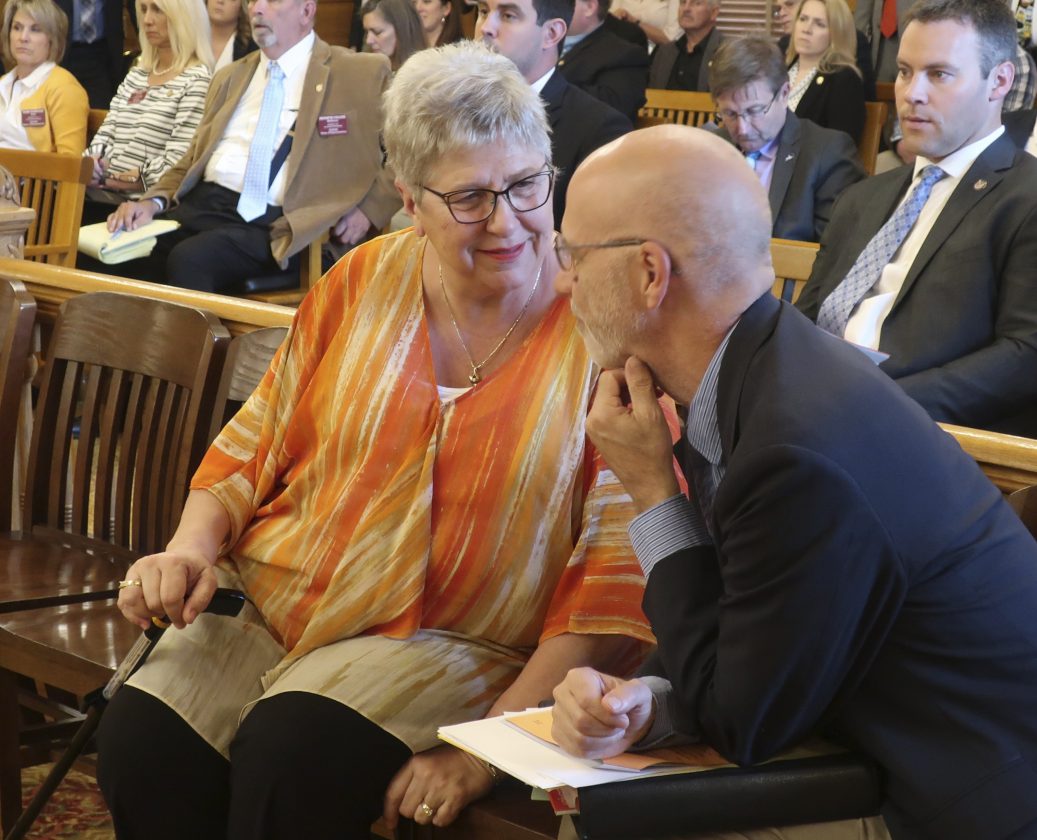 Kansas state Rep. Brenda Landwehr, left, R-Wichita, confers with J.G. Scott, the acting director of the Legislature’s research staff, during a meeting of GOP lawmakers on budget issues, Friday, May 3, 2019, at the Statehouse in Topeka, Kansas. Supporters of Medicaid expansion are holding a proposed $18.4 billion hostage to force a vote on an expansion plan. (AP Photo/John Hanna) 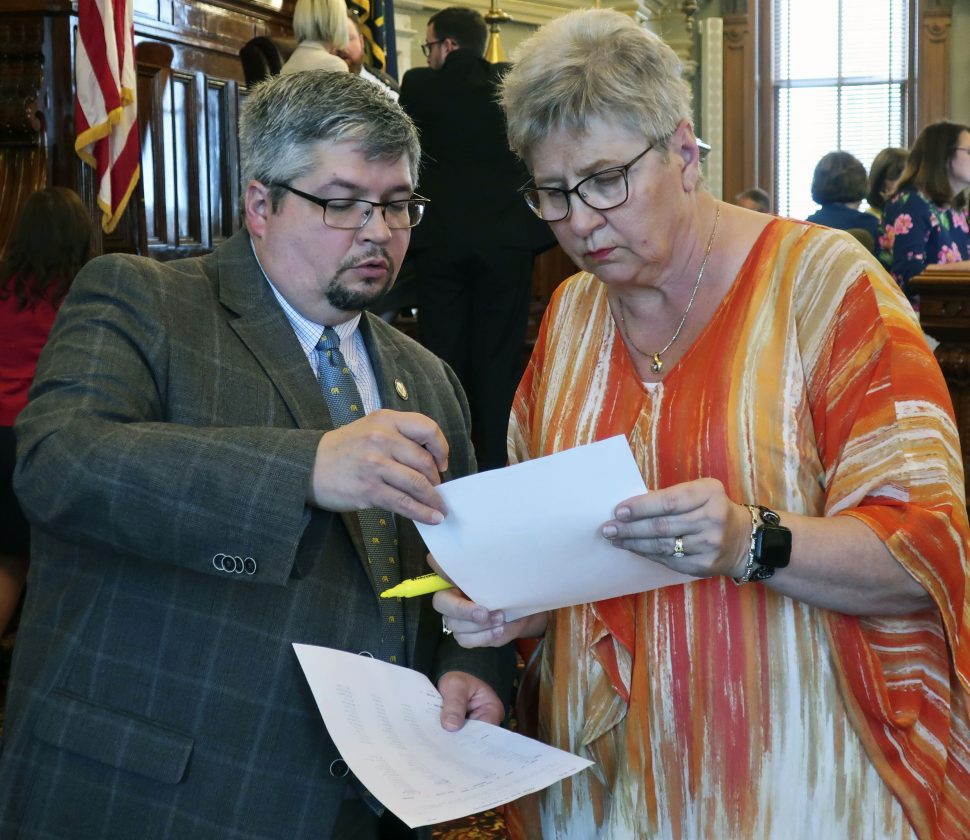 Kansas state Reps. Kyle Hoffman, left, R-Coldwater, and Brenda Landwehr, R-Wichita, review a tally of the House vote against a proposed $18.4 billion budget, Friday, May 3, 2019, at the Statehouse in Topeka, Kan. The budget narrowly failed because Democrats and moderate Republicans wanted to block it in hopes of forcing a Senate vote on Medicaid expansion. (AP Photo/John Hanna)