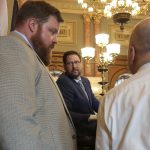 TOPEKA — Abortion opponents are waiting until next year to try to overturn a Kansas Supreme Court decision protecting abortion rights, signaling they may not have enough support yet to push the necessary state constitutional amendment through the Legislature.

Top Republicans in the GOP-controlled Legislature were outraged by last week’s ruling that the Kansas Constitution grants a “right to personal autonomy” that includes a woman’s right to end her pregnancy. Lawmakers reconvened Wednesday after their annual spring break and could pursue a proposed constitutional amendment before wrapping up business for the year.

Instead, Republican leaders say they plan to take their time and consult legal experts on proposed language, despite the threat of state courts overturning existing abortion restrictions. Kansans for Life, the state’s most influential anti-abortion group, also is counseling delay, saying it needs time to organize the push to get a proposition on the ballot.

Abortion opponents learned this week that they still have work to do in solidifying the two-thirds majorities needed in the Legislature to put a constitutional change on the ballot for voters’ approval. They fell just short of overriding Democratic Gov. Laura Kelly’s veto of a bill to require abortion providers to tell patients that a medication abortion can be stopped once it has started.

“It always kind of feels good to have an immediate reaction to something, but if it’s going to be counter-productive, then what’s the point?” said Mary Kay Culp, Kansans for Life’s executive director. “We intend to be productive. We intend to win.”

Such uncertainty is a new political twist for Kansas. The Legislature has had anti-abortion majorities for at least two decades, and Kansas for Life enjoyed a long string of victories in enacting restrictions under Kelly’s conservative Republican predecessors before she took office in January.

Abortion rights supporters also see some political calculation in the delay. All 40 Senate seats and 125 House seats will be on the ballot next year.

But Sawyer also said the delay tells him, “They don’t have the votes.”

For decades before the Kansas Supreme Court’s decision, Kansans for Life favored incremental changes that it believed would survive court challenges. The abortion “reversal” bill, similar to laws enacted in eight other states since 2015, was expected to be its latest step forward.

Supporters said the bill would ensure that women who are harboring doubts about ending their pregnancies would know that they can stop a medication abortion after the first of two pills by taking the hormone progesterone. The treatment’s effectiveness is disputed, and abortion-rights supporters said it would require doctors to give women dubious information.

Abortion opponents needed two-thirds majorities to override Kelly’s veto — the same margin for approving a constitutional amendment. They just hit the mark in the Senate with a 27-13 vote, but fell two votes short Wednesday in the House, on an 82-43 vote. What’s more, the rules allowed the vote to be reconsidered, but an attempt failed Thursday on an 83-41 vote.

The two House votes immediately inspired doubts that the chamber would approve a constitutional amendment on abortion if supporters pressed the issue now.

“While legislators who support access to abortion are in the minority, we were able to hold together a coalition that did not give them the two-thirds majority they needed,” said Rachel Sweet, a lobbyist for Planned Parenthood Great Plains. “It’s not a sure thing for them.”

Abortion opponents haven’t released any proposals for amending the Kansas Constitution, but voters in Tennessee approved a change in 2014 that declared nothing in that state’s constitution “secures or protects a right to abortion.” The amendment also gave Tennessee’s elected officials the right to enact, amend or repeal any laws dealing with abortion.

“We want the best attorneys in the nation to read that ruling, digest that ruling and find out how best to challenge our Supreme Court,” said Senate President Susan Wagle, a conservative Wichita Republican. “We really need some time to figure out how we will address it.”