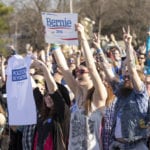 Lawrence resident Marina Johnson holds up a Bernie Sanders sign as she waits to be counted during the Kansas Democratic Caucuses at Liberty Memorial Central Middle School, 1400 Massachusetts St., on Saturday, March 5, 2016.

Starting with the 2020 elections, the Kansas Democratic Party wants members to be able to rank their preferred candidates for president when deciding a nominee for the party.

The political party announced in a news release on Thursday that it plans to move away from its presidential preference caucus method and allow its members to cast ranked-choice ballots in a primary election format.

However, the plans are not final, and the party is requesting feedback from members before it sends its finalized process to the Democratic National Committee. The party said it would accept comments and feedback until June 1 at its website, https://kansasdems.org/2020primary/.

Rank-choice voting allows voters to rank all of the nominees in order of preference. The method aims to make sure a candidate receives a general majority of preference to win the election rather than allowing several candidates to split single votes. The winner of the rank-choice election would be awarded the state’s Democratic presidential delegates.

In previous presidential elections, the party awarded its delegates through a caucus, which is an in-person nomination procedure that does not include voters casting ballots.

Along with the new format, the party announced several dates for the state’s 2020 primary election. Democratic presidential candidates will need to file with the party by Feb. 17, 2020. The party will send voting instructions to registered party voters on March 9, 2020.

The party will send out advance mail-in ballots on March 30, 2020, and voters must return them before April 24, 2020. The party will then hold an in-person primary election 10 a.m. to 2 p.m. May 2, 2020, with polling locations open in all of the 40 state Senate districts. However, voting locations are yet to be determined.

Additionally, the polling locations will use paper ballots and allow for same-day party registration or change in party affiliation registration.