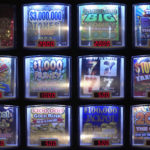 In this March 24, 2017, file photo, illuminated buttons show choices on a Missouri Lottery vending machine at Kansas City International Airport in Kansas City, Mo. Kansas has legalized the sale of state lottery tickets through vending machines, and they're expected to start popping up in stores and gas stations in 2019. (AP Photo/Orlin Wagner, File)

Lottery officials announced Wednesday that four self-service vending machines will be installed at retailers in Topeka.

The first pilot site was installed Wednesday, with the other three sites set to become operational next week.

The Kansas Legislature passed a law in 2018 allowing the lottery to sell traditional lottery tickets through vending machines.

The Kansas Lottery plans to install 272 machines at retailers across the state beginning in July.

An expected net profit of up to $8 million from the machines is earmarked for mental health programs in Kansas.