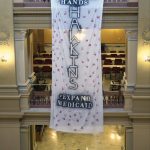 TOPEKA — The American Civil Liberties Union asked a federal judge Wednesday to make it easier to protest inside the Kansas Statehouse, as some members of the Republican-controlled Legislature worry that liberal demonstrators have become increasingly disruptive.

An ACLU lawsuit challenges rules that require groups to obtain a legislative sponsor and an event permit for Statehouse demonstrations, and that prohibit hand-held signs and banners. The lawsuit also challenges the Capitol Police’s authority to ban people from the building for violating the rules.

The ACLU filed its lawsuit after a March 27 protest in which protesters seeking an expansion of Medicaid eligibility hung huge banners inside the Statehouse rotunda. Capitol Police briefly detained three Kansas State University students who hung banners and told them they were banned from the building for a year. The ban was lifted the next day.

The state agreed to back off its enforcement of the rules in May, before the Legislature adjourned for the year, but the ACLU wants U.S. District Judge Holly Teeter to block their enforcement while its lawsuit goes forward. One of the students, Jonathan Cole, testified that he found his encounter with police “terrifying” and is wary of protesting inside the building because of the restrictions.

“I would need my government’s permission, in essence, to protest at the Statehouse,” Cole testified.

The Kansas attorney general’s office is seeking to have the lawsuit dismissed, arguing that the rules are not as restrictive as the ACLU portrays them. Assistant Attorney General Arthur Chalmers even argued during the hearing that the rules apply to organized events, disagreeing with the ACLU that they also apply to demonstrations involving only a few people.

“This case is a series of straw men,” Chalmers argued.

But Cole and Davis Hammet, a voting-rights advocate and veteran of numerous rallies for liberal causes, testified that they’ve been told demonstrators must have a permit. And Tom Day, the Legislature’s director of administrative services, said hand-held signs would be confiscated under the rules.

Day defended the restrictions, saying they allowed officials to know what groups are in the building and what they plan, in part for safety reasons.

“We need to make sure everyone in the building is safe, including 4-year-old Johnny who is there for a tour,” Day testified.

The court hearing came three weeks after a May 29 demonstration in the Senate gallery in favor of Medicaid expansion shut down the chamber temporarily. It was a protest against top Senate Republicans, who blocked a vote this year after the House approved an expansion plan backed by Democratic Gov. Laura Kelly.

“It escalated with the banners,” Senate Majority Leader Jim Denning, a Kansas City-area Republican, said last week. “They’re agitators and they want you to engage either verbally or physically.”

There have been no physical confrontations between protesters and lawmakers.

The March 27 protest for Medicaid expansion was followed by a May 3 demonstration in which about 15 protesters dropped thousands of leaflets depicting blood-stained, overdue hospital bills.

In the May 29 protest, a Unitarian minister stood in the gallery, chanting and signing and drowning out an unrelated Senate debate. Aides to Senate President Susan Wagle, a Wichita Republican, attempted to clear the floor, and a Capitol police officer even directed reporters who were recording the protest to leave — prompting letters of protest.

Even some Medicaid expansion supporters have expressed misgivings about the some of the protest tactics they’re seeing.

“Sitting in the gallery, holding signs, or chanting in the rotunda, that’s fine,” said House Minority Leader Tom Sawyer, a Wichita Democrat and expansion supporter. “When they’re chanting to the point where a session can’t take place, I think that does cross a line.”

The ACLU contends that the power granted to the state to deny permits or ban people from the building is too unfettered, and that enforcement could depend on the demonstrators’ cause. The state rejects that idea, but the ACLU noted in court that some enforcement policies are unwritten.

“I’m sure we wouldn’t have been here if they (the banners) had said, ‘I love Susan Wagle,'” testified Rep. Jim Ward, a Wichita Democrat.