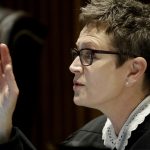 TOPEKA — The Kansas Supreme Court on Friday ruled that the state’s cap on damages for noneconomic injuries in personal injury lawsuits is unconstitutional.

The court ruled 4-2 that capping damages an injured person is able to recover in a lawsuit violates that person’s right to a jury trial. The decision does not apply to wrongful death cases or to punitive damages, which are rare in Kansas.

Opponents of the damages caps say they limit the ability to recover compensation after a jury has ruled for the plaintiff. Supporters say damages caps hold down insurance costs for the public and safeguard against “runaway juries” that award huge verdicts.

Kansas business groups decried the ruling, saying it would lead to higher insurance costs for all Kansans and put state businesses’ at an economic disadvantage, while attorneys said it would give the right to decide damages back to juries.

Democratic Gov. Laura Kelly said she needed to review the decision before commenting.

Justice Carol Beier wrote that the cap’s effect is to “disturb the jury’s finding of fact on the amount of the award.”

“Allowing this substitutes the Legislature’s nonspecific judgment for the jury’s specific judgment. The people deprived the Legislature of that power when they made the right to trial by jury inviolate,” wrote Beier, whose opinion was backed by two other justices. Caleb Stegall, who may be the court’s most conservative justice, wrote a concurring opinion that cited different reasons.

The decision comes in a case filed by Diana Hilburn, who was injured in a 2010 accident when a semi-trailer hit a car she was riding in. A jury awarded Hilburn $33,490 for medical expenses and $301,509 for noneconomic losses. She appealed when the jury’s noneconomic damages were capped at $250,000, which was the statutory limit at the time. Currently, caps for noneconomic injuries are $325,000.

State Sen. Rick Wilborn, a Republican from McPherson and the chairman of the Senate Judiciary Committee, said it was too soon to predict how the Legislature would respond to the ruling.

“Those caps were put on years ago to control costs in the insurance arena, to put some predictability back in insurance rates,” Wilborn said. “And any time you add to loss cost, you can anticipate in time as the awards mount that insurance rates will increase. It’s that simple.”

Jon Rosell, the executive director of the Kansas Medical Society, said the group believes the ruling also strikes down caps on noneconomic damages in medical malpractice cases and will likely increase doctors’ insurance costs, with those increases ultimately passed on to consumers.

Higher medical malpractice insurance premiums might make it too expensive for some doctors to practice in rural areas, he said.

“We think that this decision begins a series of dominos that will fall where ultimately the Kansas patient will be impacted,” he said.

The Kansas Chamber of Commerce said in a statement that it believes the ruling will mean Kansans could face higher insurance costs, more uninsured defendants and fewer economic opportunities. It predicted that the ruling could force Kansas businesses to close and lay off employees “because of one frivolous lawsuit.”

“On behalf of its members and tens of thousands of employees, the Kansas Chamber calls on the Kansas Legislature to not let this decision stand unchallenged,” CEO and president Alan Cobb said in the statement. “To do so, would once again be ceding its responsibilities to another state branch of government.”

The Legislature imposed the caps in the 1980s because it feared liability insurance was too costly and, Rosell said, “Now it appears that we’ll be returning back to that era.”

David Morantz, a personal injury attorney for the Kansas City law firm of Shamberg, Johnson & Bergman, said damages for such things as loss of wages and medical expenses can be calculated but noneconomic injuries such as loss of enjoyment of life or disfigurement are more difficult to determine, which is often why people seek help in the courts.

“Now, with this, the noneconomic damages are whatever the jury says they are, and that’s how the law should be,” he said.