Chief justice of Kansas to retire in December 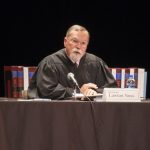 Kansas Supreme Court Chief Justice Lawton Nuss speaks to an attorney during oral arguments at the Lied Center of Kansas on Monday, April 1, 2019.

Topeka — The Kansas Supreme Court’s chief justice plans to retire before the end of the year, allowing first-year Democratic Gov. Laura Kelly to leave a bigger mark on the state’s highest court than her conservative Republican predecessors.

Chief Justice Lawton Nuss announced Friday that he would step down Dec. 17 after serving on the court since 2002 and as chief justice since 2010. During Nuss’ tenure as chief justice, GOP conservatives increasingly criticized the court as too liberal and too activist for the state over rulings on abortion, capital punishment and public school funding.

His announcement came a little more than two weeks after Justice Lee Johnson, another target of criticism on the right, announced plans to retire in September. That means Kelly will have two appointments to the seven-member court since she took office in January, whereas conservative GOP Govs. Sam Brownback and Jeff Colyer had only one appointee between them during the previous eight years.

Both justices voted repeatedly to direct legislators to increase education funding in recent years and were part of the 6-1 majority that declared in April that the state constitution protects access to abortion as a “fundamental” right. They also voted to overturn death sentences in capital murder cases, though Nuss concluded that the death penalty law itself is constitutional.

Kelly’s choices won’t have to gain support in the Republican-controlled Legislature or from its conservative leaders because lawmakers have no role in high-court appointments under the state constitution. Many GOP legislators expected to push to change the selection process after the Legislature reconvenes in January, but they won’t be able to enact changes before Kelly replaces Johnson and Nuss.

“Gov. Kelly and her political allies on the bench are clamoring to pack the high court before the Kansas people, through their elected representatives, have a chance to reform the process,” said state Sen. Ty Masterson, a conservative Wichita-area Republican who advocates having the state Senate confirm court appointees.

A commission led by lawyers will screen applications for the two high-court vacancies, hold public interviews and submit finalists’ names to Kelly.

Explaining the timing of his departure, Nuss noted in a letter to Kelly that Kansas governors and legislative leaders traditionally serve no more than eight years and, “By those measures alone, certainly, it is time I depart.”

In an Associated Press interview, Nuss, a former Marine, said he and his wife want to work on veterans issues, such as establishing specialized courts to treat veterans who run afoul of the law. He said he discussed that topic with fellow veterans about a month ago in Washington.

“I’m very passionate about it and if I step away from being on the bench, then I can go further and speak out more forcefully on those issues,” he said.

Nuss’ retirement automatically will elevate the next most senior justice, Marla Luckert, to chief justice. Both she and Nuss were appointees of moderate Republican Gov. Bill Graves.

Johnson and three other justices were appointed by Democratic Gov. Kathleen Sebelius. Justice Caleb Stegall, the only dissenter in the abortion case, was appointed by Brownback.

Justices face a statewide, yes-or-no vote every six years on whether they should remain on the Supreme Court, and its rulings in recent years inspired campaigns to oust all of them except Stegall. They all narrowly failed, including one against Nuss and three other justices in 2016.

Kansas law would have allowed Nuss to stand for retention again in 2022 and serve through 2028.

Before being appointed to the court, Nuss served in the Marines for four years before attending law school at the University of Kansas and practicing law in the central Kansas town of Salina for two decades. He also has an affinity for cowboy poetry and has judged state contests.

“He’s been in the arena, doing difficult work on behalf of Kansans,” Kelly said. “And he has done it well.”