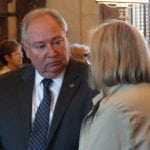 Senate Majority Leader Jim Denning talks with Sen. Molly Baumgardner Monday, April 30, 2018 as senators prepare to debate a budget bill that adds roughly $1 billion in total state spending through the end of the next fiscal year.

OLATHE — A judge threw out a defamation lawsuit filed by Kansas Senate Majority Leader Jim Denning against The Kansas City Star over a column criticizing him for opposing Medicaid expansion.

Denning alleged that The Star and Rose defamed him because Rose attributed statements against Medicaid expansion to him that he never made. Rose contends the statements came from a 2018 conversation between them, but he resigned as a contributing columnist after Denning’s staff questioned his work.

Denning and other top Republicans in the GOP-controlled Senate blocked a vote this year on a House-passed Medicaid expansion plan favored by Democratic Gov. Laura Kelly but have publicly committed to a debate next year.

“And more importantly, he protected the First Amendment rights of The Star and all journalists,” Nelson said in an email to public radio’s KCUR-FM.

The judge plans to rule later on Denning’s claims against Rose. Mike Kuckelman, the senator’s attorney, said an appeal of the ruling against Denning’s claims is “definitely something that will be considered.” He said Rose’s column was “misleading at best.”

“The Star accepts no legal responsibility whatsoever for what’s printed in that newspaper,” Kuckelman said.