After its first hemp season, what did Kansas learn? 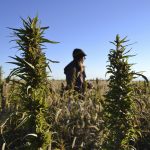 After one season of hemp production in Kansas, agriculture experts say they are excited about the future of the crop, but acknowledge the difficulties it presented to farmers.

At the Kansas Farmers Union conference hosted at the DoubleTree in Lawrence, Kansas Department of Agriculture employee Dana Ladner said she saw the crop’s recent emergence in Kansas as an opportunity for a new workforce in the state and for entrepreneurs to come up with ways to streamline the crop’s harvesting process.

At a Thursday afternoon lecture, Ladner was joined by Cary Rivard, who conducted hemp research this year through Kansas State University’s Horticulture Research and Extension Center in Olathe, which he directs. He shared some of the difficulties of this year’s season with the audience.

One of the biggest issues is that hemp cannot be harvested if it contains more than .3% THC, the psychoactive compound in marijuana that makes people high.

Kansas farmers are currently producing hemp either for its fiber or for CBD, an oil that people extract and use in the health and wellness world. But it’s hard to know how much THC one’s crop will contain, especially since Kansas’ weather is so diverse and hemp farmers only have one season of experience under their belts. Every crop has to be tested by the KDA to check its THC levels.

Ladner said 6% of this season’s crop was “hot,” meaning it contained more than .3% THC, and that the crop had to be destroyed. This is an economic risk for farmers, Rivard said.

While hemp farmers will be offered crop insurance starting in 2020, it won’t apply if their crops test as “hot.”

“We had 350 plants, and it about killed us,” Rivard said, noting that he couldn’t imagine how farmers could handle 80 acres of the plant, the most acres permitted with licenses in 2019. In 2020, the limit will be increased to 320 acres per license.

Ladner said she was grateful to K-State for helping Kansas conduct hemp research. She also said she hoped that young engineers would get involved and come up with ways to improve the harvesting, trimming and cleaning process.

After Rivard’s presentation, Ladner shared data with the crowd about the number of licenses Kansas distributed. In 2019, 342 licenses were distributed, but, of those, 82 licensees voluntarily withdrew.

“With hemp, there was no market, and we knew that, because we are an emerging state,” Ladner said. “And so we really wanted folks to think through the entire process all the way to the end.”

As of Wednesday, 315 license applications have been processed for 2020. Forty percent of the applicants were new this year.