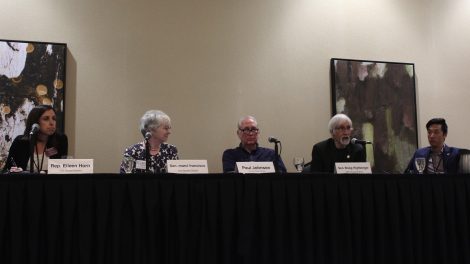 If one could change one aspect of the state budget, what would that be?

Carpenter, a reporter at the Topeka Capital-Journal, engaged the panelists in a series of “lightning round”-style questions. The panel discussion was meant to preview the hot topics of the 2020 session.

Highberger began by bringing up an issue he repeatedly mentioned throughout the panel: criminal justice reform. He suggested the state needs to work on improving salaries for state employees, specifically mentioning corrections officers. He said he also wants to see the state direct more funding toward programs to prevent recidivism. 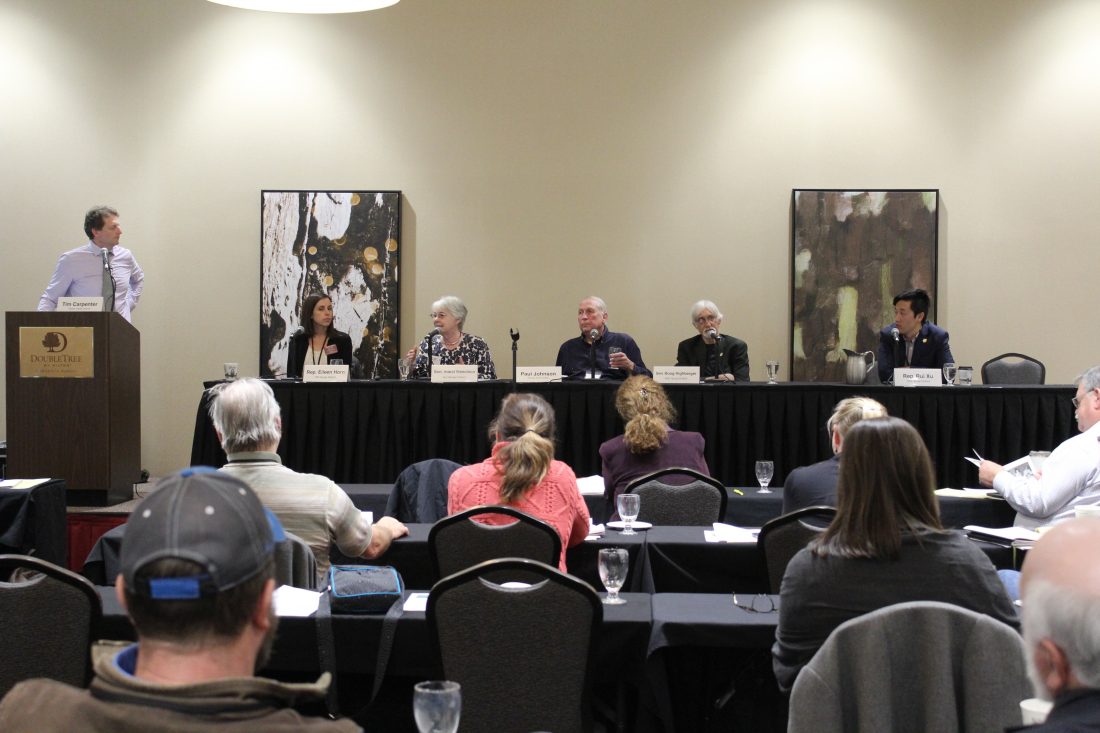 “That would end up saving us lots of money in terms of incarceration costs,” he said.

Xu said he’s been thinking a lot about child care since he became a father six weeks ago. He mentioned universal pre-K and parental leave, then directed his answer toward his audience, noting that more needs to be done in rural areas to support parents.

“A babysitter costs pretty much the same no matter where you are in the state, but jobs pay better in Johnson County, right? So a lot of the young parents end up moving to Johnson County,” he said.

Horn said the state needs to continue to repair its “broken” foster care system, continue investing in the Department for Children and Families and continue restoring cuts to higher education. She also mentioned the Kansas Water Plan but let Francisco take the lead.

Francisco said Kansas’ State Water Plan needs to receive full funding support by the Legislature, noting that in years past, the Legislature has not given the plan the general fund dollars it is meant to receive.

“We have a map for things that we can do, but we have to this date refused to fund it,” she said.

Johnson noted the need to address food insecurity, suggesting that DCF needs to be better staffed in order to address “the hunger problem in our state.” Johnson said that one in three households of single women with children are food insecure.

“We need to get serious about healthy families,” he said. “They don’t hold hearings at the state Capitol on what hunger means in the bread basket, and we need to elevate that dialogue.”

Notable topics in the agriculture discussion — especially relevant at the convention — included a recommendation from Xu that Kansas should create a tax incentive for farmers to put in carbon sequestration technology, which is a method of removing carbon dioxide from the atmosphere. Horn said she thinks Lawrence and rural Kansas might be able to work together to get plastic bags banned statewide, noting that they are a health threat for cattle who see them as food.

Lawrence is currently considering charging for plastic bags, and Horn said a Finney County commissioner proposed a plastic bag ban in the past to protect cattle.

“I think there could be an interesting coalition there between folks in Lawrence and folks across the state who are livestock producers,” she said.

The Kansas Farmers Union Convention continues Thursday with lectures on hemp, progressive farm programs and a historic presentation on Kansans who worked to stop the forces of intolerance in the state. A complete program can be found online at kansasfarmersunion.com.