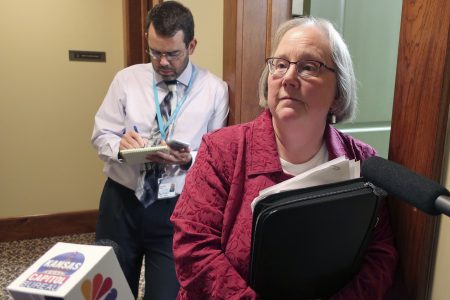 Laura Howard, right, the top administrator at the Kansas Department for Children and Families, speaks with reporters about the agency's decision to cancel a grant for a literacy program for public elementary schools, Friday, Aug. 16, 2019, at the Statehouse in Topeka, Kan. The department says a previously unreleased audit found that the company received millions of dollars it wasn't entitled to under former Republican Gov. Sam Brownback's administration. (AP Photo/John Hanna)

TOPEKA — Kansas has canceled a grant for an early literacy program for public school children after a previously unreleased audit found that the company administering the course received millions of dollars it wasn’t entitled to during former Republican Gov. Sam Brownback’s administration.

Democratic Gov. Laura Kelly’s administration said Friday that Hysell & Wagner claimed nearly $2.3 million in 2014 and 2015 that it shouldn’t have for operating the Kansas Reading Roadmap program. That conclusion came from an internal Department for Children and Families audit that was started during Brownback’s administration but never finalized — so that it did not become public.

The department said it found other problems with the grant, including excessive payments for executive salaries and expenses from Temporary Assistance for Needy Families funds, which are designated for needy families. Those expenses included 38 trips between Kansas and CEO residences in Washington, D.C., and San Diego.

The company’s grant with the department was worth about $9 million in a typical year. DCF Secretary Laura Howard said that despite “heightened oversight” during the first six months of the year, Hysell & Wagner still fell short of basic standards for spending funds efficiently.

Howard said while she’s heard positive things from school districts about the literacy program, the department did not collect data measuring its effectiveness and the company had faced “little accountability.”

“There was not clarity on how many kids they should reach, how many school districts, how expenditures should be split between different functions — just very, very poorly executed and then very, very low accountability around that,” she told reporters at the Statehouse.

Brownback touted the Reading Roadmap program as an important initiative for improving literacy and closing achievement gaps for young elementary school students and it will continue for now. The state plans to directly fund the schools planning to offer the program for this academic year.

The director of the Reading Roadmap program, Andrew Hysell, said the company was confident it had properly operated the program, The Wichita Eagle reported .

“We’ll stand behind our administration of this grant. We’ll go before the Legislature. If we need to, to save our reputation, we’ll go before a court,” Hysell said. “We are very 100 percent behind our work.”

The department said the company’s owners received $216,000 in direct expenses, and more than $607,000 was designated in the grant as guaranteed payments for the owners to cover indirect expenses. The expenses charged to the Reading Roadmap grant exceeded a limit of 15 percent of grant costs, according to the department.

Howard said her agency tried “in good faith” to work with Hysell & Wagner to correct the issues but the company rejected revisions for its contract for the current budget year. She told reporters that “there really was no effort” to contain administrative costs.

“I’ve always been concerned about the use of no-bid contracts and lack of accountability under the previous administration,” Kelly said in a statement. “It’s clear that the State of Kansas cannot continue to support Hysell & Wagner’s administration of the Kansas Reading Roadmap program.”