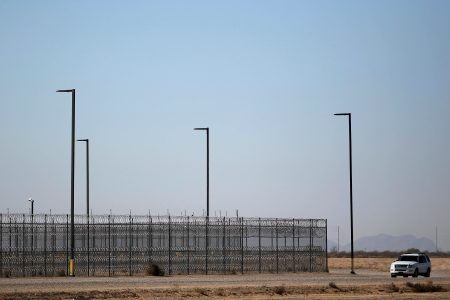 In this Jan. 20, 2016, file photo, an unmarked police truck patrols the outside of the Saguaro Correctional Center private prison operated by CoreCivic in Eloy, Ariz.

TOPEKA — Kansas plans to ease crowding in its prison system by moving scores of inmates to a private prison in Arizona over the next four months, an arrangement that made some top state lawmakers uneasy before the contract with a giant corrections company was negotiated.

The state Department of Corrections announced Friday that it signed a contract with CoreCivic Inc. to house up to 360 male inmates at the company’s Saguaro Correctional Center in Eloy, Ariz., roughly halfway between Phoenix and Tucson. The department said the first group of 120 inmates will move to Arizona by the end of the summer and the rest by the end of the year.

Kansas’ inmate population has reached the listed capacity of its prisons of 9,920 and it is housing more than 100 inmates in county jails. That’s after the state boosted those prison capacity figures two years ago by declaring that inmates could be housed two-to-a-cell in much of the system, including in places where officials previously hesitated to do it.

State prisons were plagued with staffing shortages and there were multiple riots in 2017 and 2018. Democratic Gov. Laura Kelly, who took office in January, issued a statement Friday saying she was “left with a crisis in corrections.”

“We came into a mess,” she said, noting that she has opposed using private prisons in the past. “The decision to send some of our inmates to a private prison wasn’t made lightly.”

However, the budget law required leaders of the GOP-controlled Legislature to release a majority of the funding. In a June meeting with Kelly, top Republican lawmakers expressed misgivings about relying on private prisons and blocked $6.6 million of the funding, limiting the number of inmates who can be moved outside Kansas to 360.

“This is not a long-term solution,” House Speaker Ron Ryckman Jr., an Olathe Republican, said Friday. “It’s a temporary situation, where we make sure that everybody’s safety — inmates and staff — is being considered.”

In June, top Republican lawmakers publicly fretted about what conditions inmates might face in Arizona, despite Kansas corrections officials’ assurances that visits there found them acceptable. Under the new contract, CoreCivic will provide an on-site monitor who reports to Kansas officials, the department said.

The department also appeared to be acknowledging concerns that moving inmates to Arizona would be a burden on them and their families. It said that under its contract, CoreCivic will provide free video visitation services.

The state’s total housing costs under the contract will be $74.76 per day, and the company said its officials “appreciate their trust in us.”

Nashville, Tennessee-based CoreCivic has come under fire from the left as one of two private companies that operate most migrant detention centers for U.S. Immigration and Customs Enforcement. According to CoreCivic’s financial statements, ICE detention accounted for 25 percent of the company’s $1.8 billion in total revenue in 2018.

CoreCivic already is building a 2,432-bed prison for Kansas in Lansing, outside the Kansas City area, to replace the state’s oldest and largest prison there. The state is buying the new prison over 20 years under a deal executed early in 2018 during Republican Gov. Sam Brownback’s administration. Kelly, then a state senator, was a critic of that deal.

GOP legislative leaders backed the Lansing prison deal and noted that the state will run the new prison.