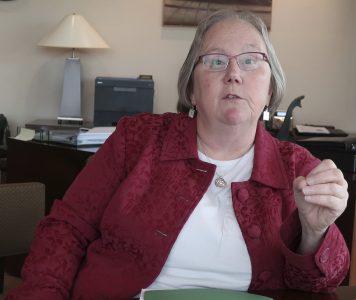 In this July 25, 2019, photo, Laura Howard, the top administrator at the Kansas Department for Children and Families, answers questions about the agency's draft guidance for foster parents and child placement agencies in caring for LGBTQ children in foster care, during an interview in Topeka, Kansas. (AP Photo/John Hanna)

TOPEKA — Kansas’ child welfare agency has drafted guidelines urging foster parents to allow LGBTQ kids in their care to “express themselves as they see themselves,” riling conservatives a little more than a year after the state granted legal protections to faith-based adoption agencies that do not place children in LGBTQ homes.

The Department for Children and Families issued draft “guidance” for “prudent parenting” in mid-July, six months after Democratic Gov. Laura Kelly took office. It said foster homes should recognize LGBTQ children “by their preferred identity if it differs from their sex assigned at birth.”

Conservatives read the document as a policy directive for reshaping foster families’ lives and an attempt to skirt a 2018 law that Kelly doesn’t like for protecting faith-based adoption agencies. It’s a sharp break in tone with that law, which prevents the state from barring agencies from providing services if they refuse to place children in homes violating their religious beliefs.

The department’s move drives home the difference Kelly’s election last year made on hot-button social issues. Her administration followed eight years of conservative Republican control in a state that still has a GOP-dominated Legislature and a Republican Party with a platform declaring, “We believe God created two genders, male and female.”

The department presented the first draft of its guidelines during a quarterly meeting with private agencies that place abused and neglected children in foster and adoptive homes.

State officials said a final version could be ready later this month and won’t be formal policy or regulations, just principles for placement agencies and foster families. As such, they wouldn’t be subject to outside review — though Hawkins and other conservatives are considering legislative hearings.

Department officials said their first draft was a response to questions that private agencies passed along from foster parents who want to support LGBTQ youth. They said they’re picking up on best practices from other states and national groups.

“The fact of wanting children we’re caring for to feel safe and welcome in their foster homes just shouldn’t be a controversial issue to anybody,” Laura Howard, the department’s top administrator, said in a recent interview.

But Kelly’s views on LGBTQ rights already had conservatives on edge. Kansas said in June that it would allow transgender people to change their birth certificates to reflect their gender identities. Under Republican Gov. Sam Brownback, the state had some of the nation’s toughest rules for making such changes.

Kelly also said before taking office that she would try to avoid enforcing last year’s adoption law if she could. Conservatives link that stance and the department’s new guidance, though its officials say there is none.

“It looks like an end-run around the adoption-protection act,” said Chuck Weber, director of the Kansas Catholic Conference.

The department’s guidance says foster children have the right to wear clothing and hairstyles “that suit their gender identity” and that refusing to use their preferred pronouns “can endanger their physical and emotional well-being.”

Within days, the conservative Family Policy Alliance of Kansas criticized the guidance publicly as imposing an “invasive sexual agenda.” The first draft of the guidance included a “Q&A” discussion about transgender foster youth sharing rooms with other children and having sleepovers.

State Sen. Mary Pilcher-Cook, a conservative Kansas City-area Republican, said the guidelines endanger safety. For example, she said, the first draft tells foster parents that if space in their home is limited, a “biological boy” teenager can share a bedroom with a teenage girl.

Pilcher-Cook said both the foster parents and a child’s birth parents — who still might have parental rights — might object to the guidelines.

“It’s a problem when government takes such a heavy hand to coerce people to live out beliefs that they don’t embrace,” Pilcher-Cook said.

A later draft of the department’s guidance on its official letterhead dropped the Q&A section because, Howard said, “it’s really difficult to sort of script any particular situation.” Both drafts said case workers should ensure all children in a foster home are comfortable with the living arrangements.

And, they said, the goal always is to find foster homes that best fit children already traumatized by abuse or neglect.

“What it really boils down to is, we’re not going to be putting these kids in a hostile environment,” said Tom Witt, executive director of the LGBTQ-rights group Equality Kansas.