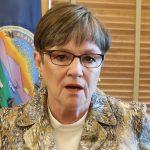 TOPEKA — Democratic Gov. Laura Kelly and top Republican legislators met Wednesday to try to break a stalemate on expanding Medicaid in Kansas, only to fail after she demanded that lawmakers approve a plan this year and the GOP leaders insisted on waiting until next year.

Kelly set aside four hours for talks in her Statehouse office with the majority leaders and heads of the health committees in the House and Senate, who oppose her expansion proposal. The meeting broke up after about 90 minutes when it became clear that neither Kelly nor the Republicans would give on whether a plan should pass this year, participants said.

The impasse sets up a high-stakes confrontation over one of the Democratic governor’s biggest campaign promises after the GOP-controlled Legislature ends an annual spring break May 1. The House approved a modified version of Kelly’s expansion plan last month, but the Senate has yet to take it up.

“She’s still willing to take (it) and try to cram it down everybody’s throats and then hope that the details come out in the wash,” said House health committee Chairwoman Brenda Landwehr, a conservative Wichita Republican. “That’s not the way to do this.”

Thirty-six states have either expanded Medicaid or seen voters approve ballot initiatives. Expansion enjoys bipartisan support in the Kansas Legislature but GOP leaders are still resisting, arguing that it is likely to prove costly to the state despite a promise that the federal government would cover 90 percent of the cost.

Kelly and other expansion supporters have been trying to build pressure on Republican leaders to allow a Senate vote. The governor has held town hall meetings in GOP lawmakers’ districts and marked the 100th day of her administration Wednesday with a statement that Senate leaders should “stop playing games with taxpayers’ health care.”

Kelly spokeswoman Ashley All said the meeting gave Republican leaders a chance to negotiate a plan “in good faith.”

“She was disappointed that they didn’t provide any solutions or ideas — only excuses and stall tactics,” All said. “It became very clear that they were not interested in finding a solution to provide affordable health care for more Kansans this year.”

Kelly’s health secretary, Lee Norman, who participated in the meeting, said the administration agrees with the GOP leaders that more work needs to be done on the Medicaid expansion legislation.

“We’d like to continue to push ahead with it,” Norman said. “The cards are on the table, and I think the details are something that we can work out.”

Top Republicans have said in recent weeks they are willing to consider a more modest expansion than Kelly has advocated, as well as work requirements or drug testing for participants.

Senate Majority Leader Jim Denning, a conservative Kansas City-area Republican, said the legislation should also address problems with rising costs for Kansas consumers who get their health coverage through a federal marketplace. Denning committed Wednesday to a debate — but next year.

“She doesn’t want to wait until next year,” Denning said. “I always say if you want it bad, you get it bad. Gov. Kelly’s wanting it so bad, she’s willing to have it bad.”