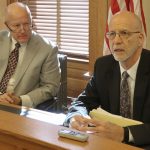 TOPEKA — Kansas officials issued a new fiscal forecast Thursday that’s slightly more optimistic about how much tax revenue the state should expect to collect over the next two years, creating a little more breathing room for expanding Medicaid or providing tax relief.

Democratic Gov. Laura Kelly immediately urged the Republican-controlled Legislature to be cautious. She vetoed a tax relief bill championed by GOP leaders earlier this month, and some lawmakers want to try again.

Kelly also is pushing to expand the state’s Medicaid health coverage for the needy to as many as 150,000 additional people. While the idea has bipartisan support, top Republicans have opposed the idea, arguing that it could prove too costly for the state.

The forecasters increased the official projections for tax revenues by less than 1% for the current budget year, the 2020 budget year that begins in July and the 2021 budget year. But the new numbers reflect a view from that group — legislative researchers, university economists and officials in Kelly’s administration — that the economy should remain solid in the short-term.

“What we’re seeing is true, good, solid growth — business growth, income growth. Those are real,” said Larry Campbell, the governor’s budget director and a member of the forecasting group. “We’re hoping that we’re stabilizing out.”

Tax collections during the current year have been 2.8% higher than during the previous year and have slightly outpaced the old forecast, issued in November. The new forecast increased the projection for the current fiscal year by $45 million to nearly $7.3 billion.

The forecasters now predict that the state will collect almost $7.5 billion in general tax revenues during the 2020 budget year, or $64 million more than previously projected. The figure for the 2021 budget year is $7.6 billion, or $53 million higher than it was.

Top Republicans pushed a tax relief bill this year to prevent individuals and businesses from paying more in state income taxes because of changes in federal tax laws. They contend that the state is receiving a revenue “windfall” from an unlegislated tax relief.

“This probably makes our case that we should be able to do it,” Hawkins said.

Kelly said this week that she would consider signing a new bill that offsets income tax relief with other revenue-raising measures to prevent a net loss of revenue for the state. But she also told reporters: “I would prefer that they leave it alone.”

Meanwhile, Kelly and other Medicaid expansion supporters have faced questions about its potential cost. The House has approved an expansion bill, but the Senate has yet to take it up.

Kelly’s administration projects the state’s net cost in the first full year of Medicaid expansion would be $34 million because of the Affordable Care Act’s promise that the federal government would cover most of the expense. GOP leaders believe the figure could be double that.