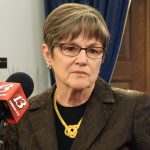 In this Feb 14, 2019 file photo, Kansas Gov. Laura Kelly ponders a question during a news conference at the Statehouse in Topeka, Kan. (AP Photo/John Hanna, File)

TOPEKA — The Kansas Supreme Court has ruled that Gov. Laura Kelly cannot file a brief in support of a law that would add about $90 million annually to public school funding.

The governor on Monday asked the court for permission to file the brief in support of a bill she signed April 5.

The Topeka Capital-Journal reports the court said on Wednesday that such motions, called amicus briefs, must be filed 30 days before oral arguments in a case. The arguments on the latest effort to address school finance litigation are scheduled for May 9.

Four school districts sued the state over education funding in 2010.

Attorneys representing the schools argued that the late request to file the brief didn’t leave them enough time to respond to her argument.