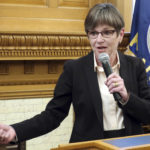 In this Jan. 24, 2019, photo, Kansas Gov. Laura Kelly answers questions from reporters during a news conference at the Statehouse in Topeka, Kansas. (AP Photo/John Hanna)

TOPEKA — Kansas will be taking steps toward allowing farmers to grow hemp for industrial use under a measure Gov. Laura Kelly signed into law Monday.

The new law requires the Kansas Department of Agriculture to submit a plan to the federal government for regulating commercial hemp production. The department is required to confer with the governor’s and attorney general’s offices before submitting the plan.

Kelly said in a statement that the new law will help the state’s agricultural economy by giving farmers another crop to grow.