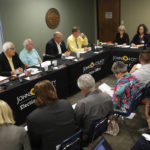 Johnson County chief council Don Jarrett speaks during the Johnson County Board of Canvassers meeting, Monday, Aug. 13, 2018, in Olathe, Kan. County election officials across Kansas on Monday began deciding which provisional ballots from last week's primary election will count toward the final official vote totals, with possibility that they could create a new leader in the hotly contested Republican race for governor. Secretary of State Kris Kobach led Gov. Jeff Colyer by a mere 110 votes out of more than 313,000 cast as of Friday evening. (AP Photo/Charlie Neibergall)

TOPEKA — As an election supervisor and poll worker for more than 20 years, Robert Bailey routinely mailed in his ballot early, confident that voting problems elsewhere that he read about would have a slight chance of happening in his suburban Kansas City county.

So when the 82-year-old Republican learned from an Associated Press reporter that the ballot he mailed in advance of the 2018 primary was not counted because his signature didn’t match his voter record, Bailey said he was “really incensed.”

“What makes me feel bad is that they didn’t advise me,” Bailey said.

Bailey’s discarded ballot was among 898 ballots that were rejected for various reasons in Johnson County in the contentious August primary that resulted in then-Secretary of State Kris Kobach defeating then-Gov. Jeff Colyer for the Republican gubernatorial nomination by only 343 votes statewide.

An AP analysis of the rejected votes in Johnson County — the state’s most populous county — found that 153 primary mail-in ballots were not counted because of signatures that didn’t match the county voting records. Of those, 125 would-be voters had a family member living at the same address whose mail-in ballot also was not counted because of mismatched signatures. Among them was Bailey’s 82-year-old wife, Carol.

The analysis also found that most of the Johnson County ballots discarded for signature problems — 108 — were from Republicans.

A new law is designed to reduce the number of ballots discarded for signature issues, a move that begins to peel back some of the most restrictive election laws in the country that were implemented by Kobach while he was secretary of state. Meanwhile, self-imposed changes in Johnson County essentially eased the practice for the 2018 general election.

The AP acquired the voting data after voting rights activist Davis Hammet and the American Civil Liberties Union of Kansas filed a formal court petition to get the list of primary voters whose ballots were rejected. A judge ruled that election officials had violated open records law by refusing to provide the names to Hammet. He shared with AP the list of voters, and the AP made open records requests to obtain additional data.

The exact-match signature requirement is a little-known provision of the Kansas Secure and Fair Elections Act championed by Kobach, who lost the gubernatorial race but is known nationally for his efforts to tighten voting laws with the stated goal of keeping ineligible people from voting. That legislation also ushered in a slew of restrictive voting laws such as voter ID at the polls and a proof-of-citizenship requirement for voter registration that has since been ruled unconstitutional.

The AP analysis highlights how counties differ in their implementation of the exact-match rule. In Sedgwick County, the state’s second largest county and home to Wichita, no mail-in ballots were rejected in the 2018 primary due to signature mismatches. County Election Commissioner Tabitha Lehman said she has training in handwriting analysis and had instituted a process that favors voters and proactively reaches out to voters to fix signature issues.

In contrast, Johnson County hewed closely to Kobach’s guidance on a strict reading of the signature issue.

Following the 2018 primary, Johnson County reviewed its procedures and found that of the 153 ballots not counted because of mismatched signatures, only 10 were determined not to be the signature of the named voter, according to Johnson County Election Commissioner Ronnie Metsker. He said the remaining 143 appeared to be spouses signing each other’s ballot or the ballot of another household member.

The county’s board of canvassers pushed for a change in the process with the goal of counting as many ballots as legally possible. Beginning in the 2018 general election, the county counted multiple ballots from the same household even if they had mismatched signatures, if it was apparent that members of the same household had switched envelopes and signed each other’s envelope. His office also attempted to contact the voter to fix the signature before the board of canvassers met eight days later, Metsker said.

The political outcry over the hundreds of discarded mail-in ballots statewide in the 2018 primary led to legislation signed Monday by Democratic Gov. Laura Kelly that requires election officials to notify voters before their mail-in ballots are thrown out because of problems with signatures.

The new law also gives voters an additional week or longer to cure a signature issue until the canvass in each county. Voters previously had only until the end of Election Day to fix the problem.

“I hope this will be the first of many laws that help ensure that every voice is heard in our democratic process and that every vote is counted,” Kelly said.