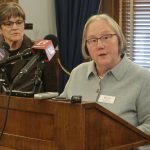 In this photo from Feb. 14, 2019, Laura Howard, right, secretary of the Kansas Department for Children and Families, answers questions from reporters a news conference as Gov. Laura Kelly, left, watches at the Statehouse in Topeka. (AP Photo/John Hanna)

TOPEKA — Child welfare advocates in Kansas who spent more than a year examining the state’s troubled foster care system are frustrated with what they see as the Legislature’s lack of action on their recommendations for fixing the problems.

Democratic Gov. Laura Kelly says she understands their frustrations but argues that her administration and lawmakers are making progress. She also says it will take time to fix the years of problems left by her Republican predecessors.

More than a dozen members of a child welfare task force and its subcommittees have signed a letter urging lawmakers to do more to address problems in the system that provides foster care for abused and neglected children.

The GOP-controlled Legislature might not have much time left this year. Lawmakers reconvene May 1 after their annual spring break and are scheduled to wrap up their business for the year by May 17.

“It seems like a waste,” social worker Sarah Coats, who signed the letter, told The Kansas City Star. “We have all of this information, all of the research done, people are committed to work and know what needs to be done and no one is doing anything. It’s like screaming at a brick wall.”

In recent years, the state faced questions about several high-profile deaths of abused children after the Department for Children and Families was alerted to problems. Until September, some children in state custody slept overnight in foster care contractors’ offices, including a 13-year-old girl who was raped in an office.

Lawmakers are close to funding dozens of new child welfare workers over the next two years. They also have passed a bill that would allow Kansas for the first time to use federal funds to pay for prevention services to help keep children out of foster care.

Kelly told reporters that like the advocates, she would like the state to be moving faster on the task force’s recommendations, but said it can’t happen.

“I share their frustrations, but I also have to deal with reality,” she said. “You know, there are so many things wrong within our child welfare system that you have to sort of prioritize and attack them in a systematic way.”

The task force made nearly two dozen recommendations, including improving information sharing among parties involved in the child welfare system, investing more in foster care recruiting and creating a new task force to examine the cost of better services and how to fund them.

Task force members said in their letter that they have “deep concern” that lawmakers have only made minimal progress and have made no progress on most recommendations.

“I certainly hope it doesn’t take further child tragedy to inspire the actions of the Legislature,” Lori Ross, a longtime child advocate in Missouri and Kansas, told The Star.

Both Kelly and Howard suggested the issue may be that DCF needs to do a better job of communicating how it’s attempting to address problems.

“They’ve been so focused on doing the work that they haven’t been publicizing what they’re doing,” Kelly said. “Obviously, people are anxious to get these done.”