Anne Bailey, a third grade teacher at Deerfield Elementary School, waves to a car of visitors who came to celebrate her retirement from teaching after 40 years in the profession on Tuesday, May 19, 2020. Bailey's fellow teachers surprised her with a car parade for the celebration.

As she walked around the corner of Deerfield Elementary School with a group of her fellow teachers last week, Anne Bailey received a surprise when she noticed many cars lining the school’s parking lot waiting to greet her.

The cars were full of current and former students, parents and other teachers, who had arrived for a drive-by parade in celebration of Bailey’s retirement after teaching for 40 years.

The visitors showered Bailey with gifts, waves and expressions of gratitude for her long career of shaping the minds of children. She returned the appreciation by forming a heart with her hands and shedding many tears.

“I don’t do well with surprises, but this was a great surprise,” Bailey, who taught third grade at the school, told the Journal-World later. “This was exactly how I needed to finish the year to get some closure on it.”

Bailey, who worked for two years in Newton before moving to the Lawrence school district to spend the next 38 years, is one of a handful of local educators who finished their teaching careers on Friday and moved into retirement after more than three decades of service to the district.

She said seeing the students wish her well in her retirement meant a lot to her, as they were the reason she kept coming back to teach year after year.

“I was not bored a single day,” Bailey said. “I got such energy from the kids.”

That sentiment was shared by other long-serving teachers who spoke to the Journal-World last week about their careers.

Nancy Ornburn, a second grade teacher at New York Elementary, who retired this year after 41 years of service at the school, said she too was never bored during her career, which is a credit to the students.

Ornburn only worked at New York, but she had taught a few different types of classes, including multiage and combination classrooms, as well as traditional single-grade classrooms for second and third grades.

But her goals in the classroom never changed. She said she wanted to make sure the students felt comfortable and ready to learn.

“I always thought of New York as my second family and I wanted to have a safe, warm, loving place for my children in class to come to everyday to be accepted, successful, and loved,” Ornburn said in an email. “Everyday there were smiles, hugs, giggles, and hopefully a little sunshine along with the learning.”

Along with the great relationships with students, the retiring teachers said they also leaned on their colleagues throughout the years. They all said they valued the support from their colleagues, which is needed to make it through a long career.

Jo Huntsinger, a Lawrence High School science teacher who retired after 36 years of teaching, said she had the pleasure of working with many custodians, secretaries and paraeducators, among others, who “bend over backwards” to make teachers’ lives easier.

“I really do attribute my longevity to those people, the real heart of Lawrence High School,” she said. “I also had great mentors along the way. When you’re a young teacher and don’t know anything, they just take you under their wing.” 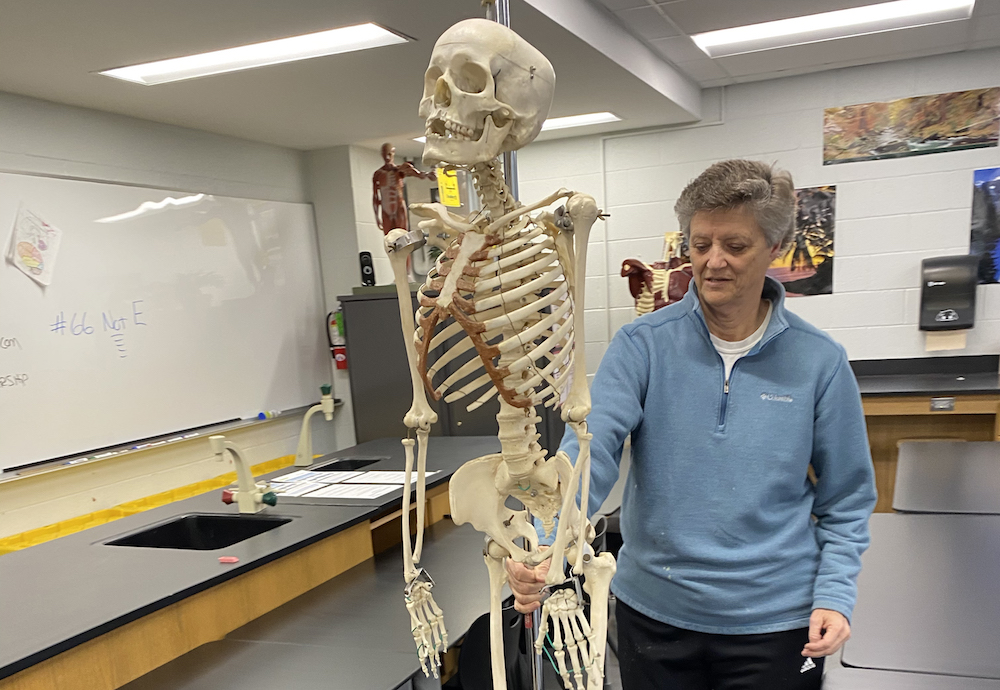 Jo Huntsinger, a retiring Lawrence High School teacher, packs up her classroom in March after schools were closed for the remainder of the school year because of the coronavirus pandemic. Huntsinger retired from teaching at the conclusion of the school year last week after serving at the high school for more than three decades.

Although she’s credited for 36 years of teaching, Huntsinger actually began her career at LHS a few years prior. Her first job out of college was serving as the school’s volleyball coach, giving her a grand total of 38 years of service.

She also grew up in Lawrence and graduated from LHS, making her very passionate about the school.

“I did have opportunities to go to other places … but I just really like Lawrence and I love Lawrence High School,” Huntsinger said.

Unfortunately, the ongoing coronavirus pandemic disrupted Huntsinger’s plans to celebrate the end of her teaching career. She said she expected she would be able to say goodbye to all of her colleagues and students when the school year ended on Friday.

Instead, the state closed schools because of the virus while LHS was on spring break, and Huntsinger cleaned out her classroom well before the end of the year. She said the reality of her retirement felt “emotionally flat.”

“There’s no closure whatsoever,” Huntsinger said, noting it may not set in until next fall when she doesn’t return to the school for work.

However, throughout the school year, board Vice President Kelly Jones has recognized the teachers who are retiring. While it is a tradition for the board’s vice president to recognize retiring teachers, Jones said she always enjoyed noting their careers and commitment to education.

“It amazes me how many lives educators impact over the course of their careers,” Jones said in an email to the Journal-World. “The community should certainly make time to formally thank them and wish them joy in their retirement. It’s well deserved.”

Still, the retiring teachers are ready for new adventures. Huntsinger said she plans to explore different work opportunities, while Bailey and Ornburn said they hope to spend more time with their grandchildren and travel.

But it may not be long before some of the teachers step foot in school buildings again. Ornburn said she already plans to eventually help the school district in other capacities, such as serving as a guest reader to the students.

“It’s my life and my passion being with the kids every day,” Ornburn said. “There’s just something in a teacher that makes them want to go back,” she added.

Many other Lawrence educators retired from teaching after long careers. Here are some that served the Lawrence school district the longest: