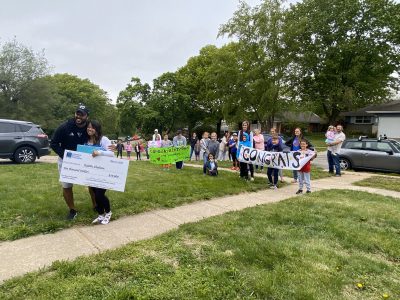 Kaitlin Shulman, Quail Run Elementary second grade teacher, stands with her husband, Matthew Shulman, and a check she received for winning the Lawrence Schools Foundation's annual Bobs Award on Wednesday, May 13, 2020. Shulman's students surprised her at her home for the announcement of the award.

A teacher at Quail Run Elementary known for her “positive, can-do attitude” has been recognized with one of the most prestigious local teaching awards.

Kaitlin Shulman, a second grade teacher for Quail Run, on Wednesday received the Lawrence Schools Foundation’s annual Bobs Award, which aims to honor a Lawrence educator for excellence in teaching.

The award, which includes a $10,000 prize, is given each year to a teacher who exemplifies extraordinary instruction skills, shows commitment and dedication to teaching, and focuses on individual student achievement, among other considerations, according to the foundation. It was created more than 20 years ago by a group of civic leaders who shared the first name of Bob and choose to remain anonymous, the foundation said.

While noting her attitude, a parent who nominated Shulman wrote in a letter that she was deserving of the award because she gets to know her students on a personal level and uses that knowledge to motivate them to learn.

The parent also credited Shulman for her ability to make learning fun for the students through inventive ideas, such as the time when she turned the classroom into an operating room — “complete with trays of supplies, surgical caps, and surgical booties” — for a grammar lesson on contractions. The students then “operated” on the words to remove unnecessary letters.

“I have to say I am in awe of her preparedness, organization, and innovativeness,” the parent wrote.

Superintendent Anthony Lewis and the Lawrence Schools Foundation surprised Shulman with the award Wednesday during a school faculty online conference call, according to a video recording of the announcement. After Shulman was announced the winner, she was also surprised at her home by the foundation’s executive director, Dena Johnston, and the students of her class.

“It was so difficult to not be able to hug my students and express my appreciation,” Shulman said in an email to the Journal-World. “Seeing them from a distance especially after being apart now for so long, it was so hard. But I am so grateful to all the students and families who nominated me and everyone at USD 497 and the Lawrence Schools Foundation for putting the surprise together.”

Shulman has taught at Quail Run for five years, according to her profile on the school’s website. Along with teaching, Shulman is also the cheer coach at Lawrence High School and an assistant coach for the University of Kansas cheer team.