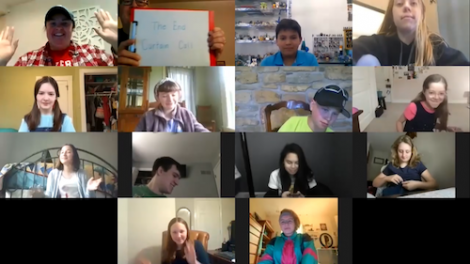 For students at St. John Catholic School, despite a global pandemic, the show must go on.

Even if it’s through an online conference call using the actors’ homes as scene backdrops, rather than using a proper stage.

When state and local agencies shut down schools and canceled many events to slow the spread of COVID-19, St. John’s middle school theater group saw the planned live performance of their show “Kids Today” canceled. Kasey Fewins, the school’s theater director, said the cancellation was a bummer, as the students had already figured out their stage blocking and were fine-tuning the show just before spring break.

Additionally, the school is K-8, meaning some of the students would miss out on their final performance before heading off to new high schools next year, she said.

“I was really upset we didn’t get to do that,” Fewins said of the canceled show. “Some of (my eighth graders) were in theater for the very first time and they weren’t going to be able to be in a production with our school.”

Instead of giving up on the play all together, the group decided to find a workaround with an online conference call production, Fewins said. It’s another example of how students and teachers in Lawrence have had to get creative with education as the COVID-19 pandemic has disrupted so many aspects of daily life.

The idea first came to the program when Bob Newton, the theater tech adviser, suggested doing an old-fashioned radio play version of the show. But Fewins said she felt she could take it one step further using the online conference call technology that so many people have flocked to during the pandemic; this allowed the students to not only read their lines but to also be seen acting out the play.

When she took the idea to her students, they were excited. She said 15 of the 18 students chose to participate in the new format, but some decided not to participate because they were more interested in running lights and sounds for the show’s original stage production.

Fewins said she was taken aback by how many wanted to continue working on the production, noting it would take more of the students’ free time. But once they began working on it, Fewins found the students didn’t even want to end rehearsal meetings.

“I would have to say after an hour and a half, ‘OK, we’re going to log off now,'” Fewins said. “But they were so excited to have a creative outlet and something to do that’s not just school work.”

The play, which was written by Fewins and edited by the students, tells the story of a family who has grandparents coming to visit, but the children have made a mess of the house, leading the parents to complain about how unruly they are, Fewins said. But the story focuses on how parents can sometimes put a lot of pressure on their children and offers reminders that kids are “pretty awesome just the way they are,” Fewins said.

For weeks, the students rehearsed their lines and acted out their scenes from the comfort — and safety — of their own homes. They also had to overcome new challenges, such as lagging internet connections and other technical difficulties, Fewins said.

But the show did go on, and the school recently posted the recorded performance online. Fewins said she was proud of the students and the final show.

“We learned a lot about each other,” Fewins said. “And about our bedrooms and our home lives,” she joked.