Despite dip in reimbursements, Lawrence restaurants to continue student meal service for remainder of school year 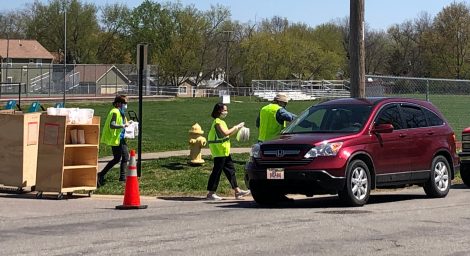 Local restaurants have stepped up for a second month to make sure Lawrence students will be able to receive meals while schools are closed for the coronavirus pandemic.

But this time the restaurants are participating in the meal service mostly through their goodwill — rather than for the additional benefit of earning a profit — because the program has decreased its reimbursement to the restaurants by nearly half.

“It feels really good to be filling our days with purpose,” Gonzalez said. “We felt really fortunate to be included in the first part of the program and it doesn’t make sense to quit just because the numbers changed a bit.”

Officials with some of the groups leading the program — the Lawrence chamber of commerce, the Lawrence Schools Foundation and the Lawrence Restaurant Association — told the Journal-World last week that the meal service program will continue for the remainder of the school year. It is scheduled to provide meals through May 23.

The program, which the Lawrence school district announced on April 14, was originally slated to last until the end of that month. But the school district was pleased with its operation and approached the groups involved to see if it could continue in May, said Hugh Carter, vice president for external affairs for the chamber of commerce.

Rick Martin, co-chair of the Lawrence Restaurant Association, said that means the restaurants now receive about $3.50 per meal. That’s a drop of more than 40% from the $6 per meal that restaurants were receiving in April.

The decreased funding has led to the restaurants just about breaking even for the remainder of the program, Martin said. That would be difficult for most restaurants, as he noted many won’t make it through the economic downturn caused by the pandemic. But the 10 participating in the program understand the importance of it and wanted to continue helping, he said.

“There is just a big restaurant heart in this to try to keep things going,” Martin said

Carter said he was heartened to learn all 10 restaurants wanted to continue, but he also said he was not surprised.

“Most of our local restaurants are the heart and soul of Lawrence, in a lot of ways, and they would give until their doors are closed,” Carter said.

Dena Johnston, executive director for the schools foundation, said the organization is still doing fundraising for the program, but she also confirmed the restaurants will be making less through the reimbursements in May than they did in April. She said she too was grateful all 10 restaurants chose to stay in the program.

“It’s been overwhelming to see how the community has come together over this,” Johnston said. “The restaurants have been amazing and super supportive.”

Additionally, Johnston said those who are interested in supporting the program may still donate to the foundation. She said donations can be made through the foundation’s website, lawrenceschoolsfoundation.org.

She also noted the program has been helped by many volunteers at the service sites. Even some teachers — who are still providing education to students during this period through remote learning — have been volunteering.

“That’s been the most rewarding to see,” Johnston said. “When the kids come through, the teachers are crying and the kids are crying because they haven’t seen each other (in person). So it’s been fun having them on site as well.”

Once the school year ends, the Lawrence school district plans to begin providing meals to students on its own again.

But even when the restaurant meal service is no longer needed in Lawrence, Gonzalez said she won’t give up the fight against hunger. Along with her support for the students, she said Global Cafe has also been providing weekend community meals to anyone who needs it. That service provides free sack lunches from 9 a.m. to 1 p.m. on Saturday and Sunday at the restaurant, 820 Massachusetts St.

Gonzalez said the current state of things has opened her eyes to the ongoing problem of hunger and food insecurity, which was always an issue before the pandemic.

“It’s worse now for people who have maybe never experienced it and are currently experiencing it,” she said. “But it’s an ongoing thing and it never goes away, so we’re hoping to do the community lunches on the weekend forever, if we can.

“It’s been a heartwarming experience and I really enjoy it,” she added. “And I don’t want to stop.”