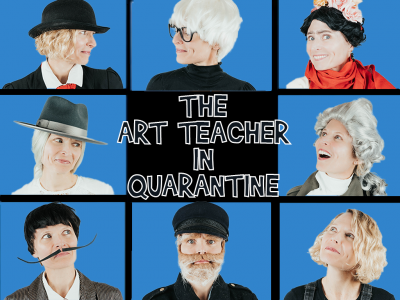 This image from the "Art Teacher in Quarantine" web series by Hannah Hurst of Deerfield Elementary shows her portraying famous artists in a set similar to the television show "The Brady Bunch."

As schools have turned to online learning during the coronavirus pandemic, teachers have explored creative ways to share educational content with students.

One Lawrence teacher has stepped her creativity up a notch during this period by launching a comedic and informative web series.

Hannah Hurst, an art teacher for Deerfield Elementary School, recently began posting episodes of her own show called “The Art Teacher in Quarantine,” which explores art lessons while also providing moments of levity during uncertain times.

In the videos, Hurst can be seen dressing up as famous artists, showing off their art, and performing skits. She also incorporates one of the most popular social media apps, TikTok, by dancing and singing regularly throughout the episodes.

The fun — but certainly wacky — series began as a way for Hurst to reach out to her more than 500 students, who she no longer has daily access to in the classroom, she told the Journal-World.

“There’s something about teaching that’s also really performative, so I just cooked up this idea like an old fashion TV show,” Hurst said. “Hopefully my kids would see it and be inspired by it or at least feel better by seeing me and allow them to take their minds off things but still learn a little bit about art.”

Hurst’s idea appears to have done the trick, as students responded immediately by providing her with photos of them dressing up in famous artworks like she does in the series.

In her first episode, titled “The Dream,” Hurst has a dream that she visits the Louvre Museum in Paris, which is home of “Mona Lisa” by Leonardo da Vinci. But she wakes up to realize she is in quarantine because of COVID-19 and cannot go see the famous painting.

Undeterred, Hurst explains in the video that she — and her students — can re-create the art they wish to see by using household items. For example, Hurst says in the video she found a wig in her home to wear in a re-creation of “Le Discret” by Joseph Ducreux, which is housed in KU’s Spencer Museum of Art. 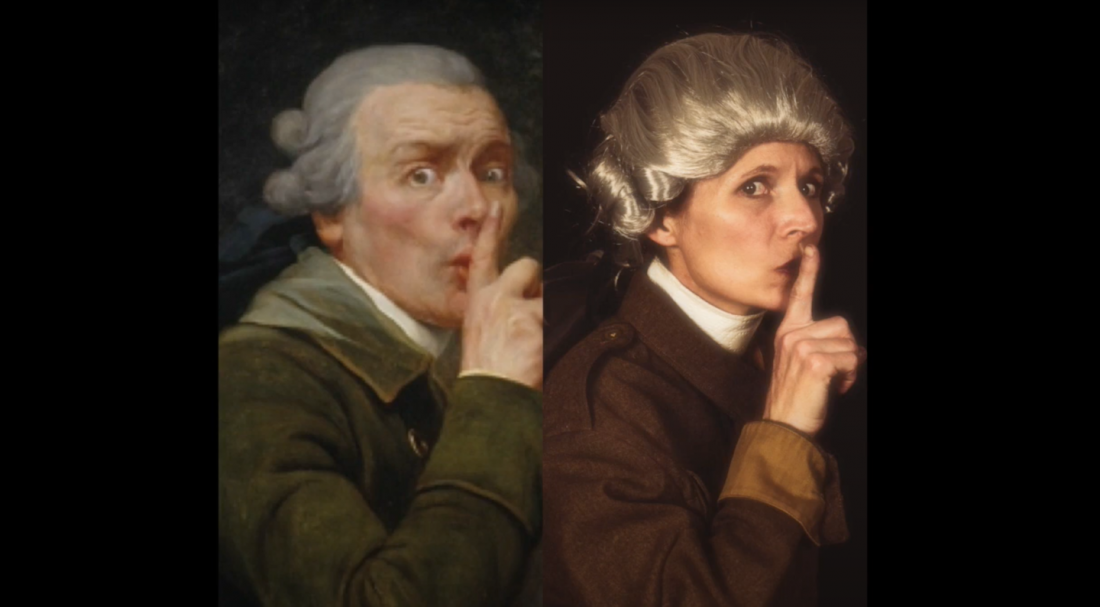 “She breathed brand new life into this old, dusty painting,” the narrator says in the video.

Hurst uses the opportunity to challenge her students to do the same while also teaching them about Yasumasa Morimura, a Japanese artist who has regularly re-created famous works by inserting himself into the portraits.

In the following episode, Hurst shows images she received from her students doing the same, with a student mimicking the Mona Lisa and others re-creating “Girl with a Pearl Earring.” Administrators also got in on the act, as Joni Appleman, Deerfield principal, and Julie Boyle, the school district’s spokeswoman, also dressed up as “Girl with a Pearl Earring.” But the crown jewel is Superintendent Anthony Lewis’ version of “Mona Lisa,” which Hurst calls “very unique” and “magnificent” in the episode.

The fun has also been noticed by the parents of Hurst’s students. She said she tried to make the videos fun for the whole family, rather than just an art lesson for elementary students.

“I get emails from kids and parents fully enjoying it,” Hurst said. “It’s been fantastic.”

One parent, in an email to Hurst, jokingly worried the series may gain too much attention, and she will soon be off to become an art teacher version of Bill Nye the Science Guy.

“On the upside, if it happens, your creativity and playful way of sneaking learning in would be on display for the world,” the parent said.

Lewis said he’s also been impressed with Hurst’s ingenuity, calling her a gifted and creative art teacher. He said he would normally be hesitant to participate in such silly videos, but he realized the benefit the videos are for her students.

“She is bringing a lot of joy to students and families during this difficult time in such a way they are learning more about different art and artists,” Lewis said. 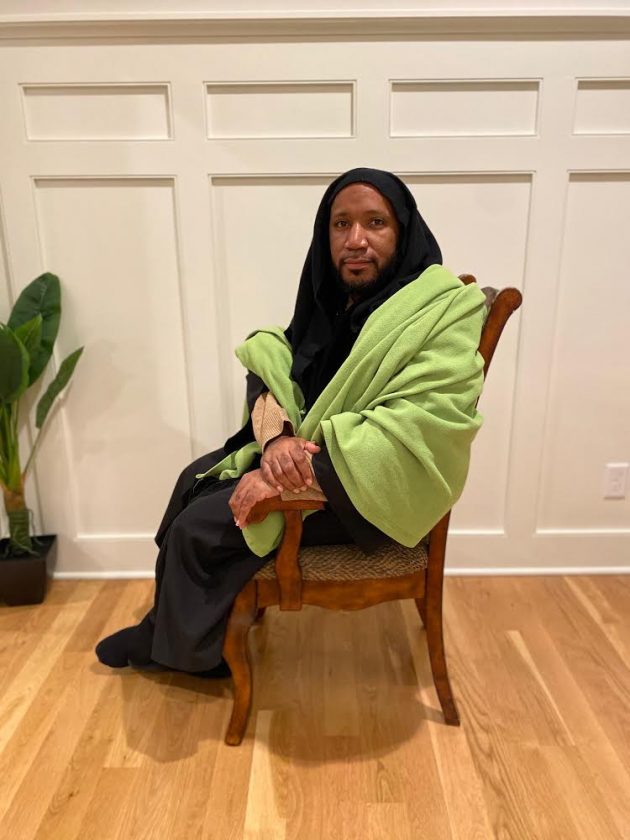 Hurst’s videos also include impressive editing that appears to be done by a professional. However, Hurst said she had very little experience making videos before launching the series and she’s trying things out and learning along the way.

She said she’s recorded all of the material on her phone and then did some light editing on her computer through iMovie, a basic video editing software. The only research she’s done was watching YouTube tutorials, she said.

Regardless, the videos have been impressive and the way she delivers the content leads to a lasting learning experience for the students, Boyle said.

“Her creativity in engaging her students in these out-of-the-box art history and appreciation projects will make them memorable.” Boyle said. “I can tell that she gets a big kick out of interviewing local artists and by sharing her own passions with her students, they are probably having so much fun that they don’t even know they’re learning.” 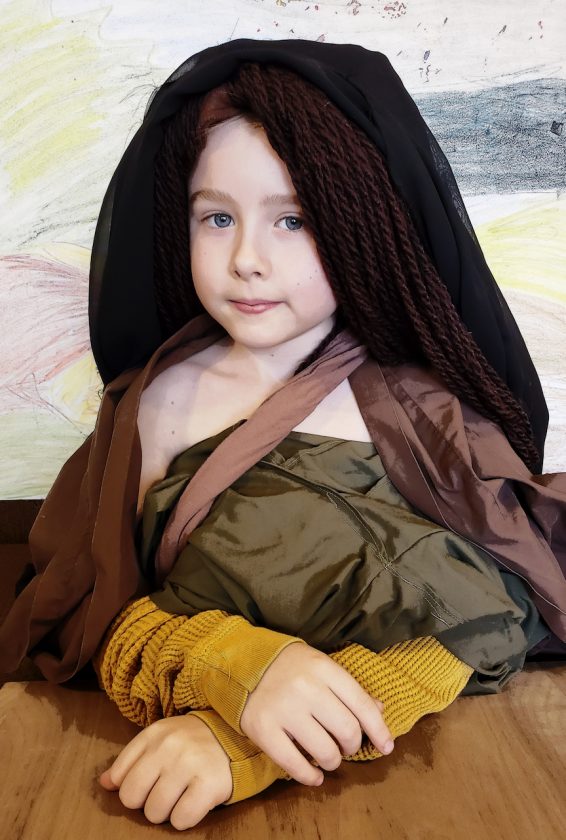 Hurst said she’s also heard from viewers outside of the school district, as an art teacher in the Kansas City area wrote to her to thank her for the fun it provides.

“She said, ‘Thank you for brining a smile to my face,'” Hurst said. “That just made my day. It’s all worth it if I can bring somebody a little bit of joy during this time where everybody is feeling a little anxious.”

Hurst said she plans to continue the series for the rest of the school year, and she may continue further after that. But when the school year starts in the fall, assuming students will be back in their normal classrooms, she may not have the time.

“Until then, I’ll keep doing it because it’s so satisfying,” she said.

As of May 1, Hurst has uploaded four episodes of “The Art Teacher in Quarantine,” all of which can be viewed on Hurst’s YouTube page.