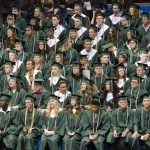 Despite rising cases of COVID-19 in Douglas County, hundreds of Lawrence high school seniors will be gathering for graduation ceremonies this weekend.

Although the number of people who attend the events will likely surpass the county’s current 45-person gathering limit, the Lawrence school district said that it thought the ceremonies would be safe for the public and that it had the blessing of the Lawrence-Douglas County Health Department.

“We would not be hosting graduation ceremonies if we did not think we could do so safely by mitigating the risk of disease spread,” school district spokeswoman Julie Boyle said in an email to the Journal-World.

When asked how many people the district estimates will attend, Boyle said LHS has about 350 graduates and Free State has about 430. However, she noted that in the past some graduates have not attended the ceremonies, a number the district anticipates to increase this year.

Those who attend the ceremony will observe 6 feet of physical distancing through seating for all students, staff and guests. To attend, guests are required to have tickets. Boyle said the ticketing system allowed up to five guests per graduating student.

Superintendent Anthony Lewis said on Monday that the ticketing system was limiting the number of guests to under half of each stadium’s capacity. He also said all guests would be required to wear masks.

“We do have safety precautions in place, and we will need everyone’s cooperation to follow them,” Lewis said on Monday.

However, some are still uneasy about the event. School board member Shannon Kimball said during the Monday meeting that she was unsure whether she would attend the events because she is still concerned about the pandemic.

Traditionally, board members participate in the ceremonies, and Kimball said she hasn’t missed a ceremony since she’s been on the board. But the current status of the pandemic has made her reconsider.

“I personally have substantial concerns about us going forward with our graduations as planned,” Kimball said. “Given the data we have so far about the increasing growth of community spread, I have serious misgivings about being there and participating in that process,” she added.

On Wednesday, Douglas County health officer Dr. Thomas Marcellino announced that the county would remain in Phase 3 of its reopening plan, the Journal-World has reported. The plan was originally scheduled to move into Phase 4 in June, but that plan has been repeatedly extended as local cases of the virus have continued to rise. Douglas County has reported 482 cases of COVID-19 as of Wednesday, an increase of 21 cases since Tuesday.

Despite concerns, Boyle said the graduation events would continue. She said the school district has been working with the health department to ensure it is a safe event. Dan Partridge, the director of Lawrence-Douglas County Public Health, said in an email that the health department appreciated the opportunity to work with the school district to ensure a safe ceremony.

While the health department recommends mass gatherings to be limited to 45 people, the department defines “mass gatherings” as instances when people cannot maintain 6 feet of distance between each other, which the school district’s plans require.

“The plan produced by USD 497 strikes an appropriate balance that allows for graduation to proceed by following public health guidelines that reduce the risk of disease through outdoor ceremonies and social distancing,” Partridge said in the email.

Those who do not attend can watch the events live on TV or online. Boyle said the ceremonies would be broadcast on MidcoSN (Midco cable channels 622 and 32) and the official MidcoSN Facebook page, https://www.facebook.com/MidcoSNKansas/.

The graduation ceremonies were originally scheduled for May, but were moved to July because of the pandemic.