LHS, KU graduate to be a moderator in Democratic presidential debate 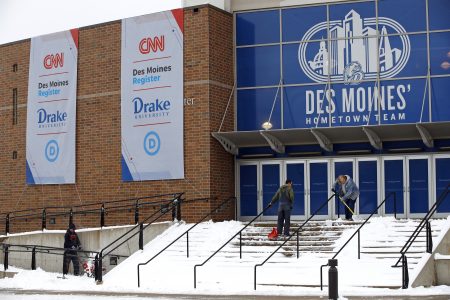 Workers clear snow outside a venue at Drake University, Monday, Jan. 13, 2020, in Des Moines, Iowa, in advance of a Democratic presidential primary debate that is scheduled for Tuesday. (AP Photo/Patrick Semansky)

A graduate of Lawrence High School and the University of Kansas will be one of three moderators during an upcoming debate among Democratic candidates for the U.S. presidency.

Pfannenstiel is a 2006 graduate of LHS, according to Journal-World archives. She graduated from KU with a bachelor’s degree in journalism in 2010, a university spokeswoman said. She interned at the Journal-World in 2009 and rejoined the staff in 2011 before working at a number of other area media outlets.

In partnership with the Register, CNN will broadcast the debate live at 8 p.m. Tuesday from the campus of Drake University in Iowa. The event will be the final debate between the candidates before Iowa caucuses on Feb. 3.