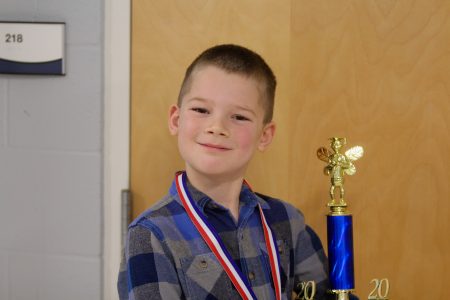 Charlie Maples, a fifth grader at Deerfield Elementary School, shows off the trophy he received for winning the Douglas County Spelling Bee. The bee was Saturday, Feb. 1, 2020, at Southwest Middle School.

After accepting the first-place trophy for the 2020 Douglas County Spelling Bee, Charlie Maples said winning the annual contest wasn’t his only notable accomplishment Saturday on the stage at Southwest Middle School.

The county bee, sponsored by the Lawrence Journal-World, drew 28 elementary and middle school students from schools in Lawrence, Baldwin City and Eudora.

In the auditorium hallway after the bee, Charlie said he didn’t actually know his heart rate during the bee but wanted to share some humor with the crowd. He did admit he was nervous.

“I could feel my heart going boom, boom,” he said. “I was shaking really bad.”

As a 9-year-old, he wasn’t expected to win the bee, Charlie said. He won through a studying routine of an hour a week in recent months and then taking the time to memorize the spelling of all the words he missed in practice, he said.

“He’s incredible,” he said. “He started reading before he was 2.”

“The only reason I won’t attend is if I’m sick,” Charlie said, noting he has an aunt in Wichita who told him she would attend the state bee if he were a contestant.