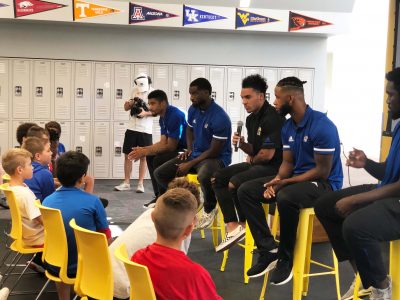 Several University of Kansas football players passed on some wisdom to Billy Mills Middle School students on Wednesday: In both sports and academics, perseverance and a positive attitude can go a long way.

“An attitude is a big part of who you are,” KU’s Hasan Defense said. “That’s what other people see. They only see what you give off.”

Defense and four other KU football players — Kyle Mayberry, Bryce Torneden, Nate Betts, and Hakeem Adeniji — were visiting the sixth and seventh grade boys at the school as part of a weekly mentorship program called Brothers for Life. Each week, athletes from the KU football program talk to the boys about such topics as the importance of pursuing an education and working hard to achieve goals.

The middle school students may also get the chance to be on TV, because Wednesday’s session was being filmed for “Miles to Go,” an ESPN series about the KU football program. The documentary-style series, over which KU has some editorial control, is available on the Big 12 Now channel of the ESPN+ streaming platform.

The mentorship program, which is in its second year at the school, is meant to inspire boys to become leaders, said Billy Mills Middle School Principal Keith Jones. He said the school also has a monthly mentorship program for sixth and seventh grade girls, although that program doesn’t include visits from athletes.

Jones said the boys could especially learn from the example of Torneden, who graduated from Free State High School in 2016. The principal encouraged the students to follow Torneden’s example by serving as mentors and role models in the community when they got older.

“When you go off to do whatever you want to do, you should come back too,” Jones told the students. “(Torneden) was once in your seat too, right here in Lawrence.”

After the players spoke, the boys excitedly took photos with them. Maverick Hawkins, a seventh grader who attends the sessions, said he likes spending time with the athletes and learning from them.

“Seeing them on TV and and then having them know us, that’s pretty cool,” Maverick said.