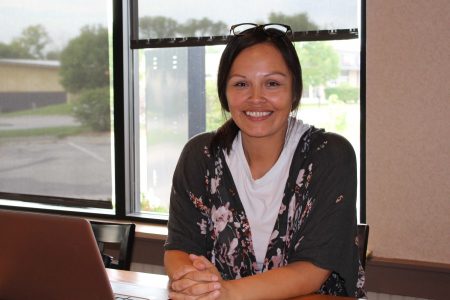 Paula Smith, a candidate for the Lawrence school board election this fall, is pictured at a Lawrence coffee shop on Tuesday, Sept. 10, 2019.

As a graduate of the former Lawrence Alternative High School, Paula Smith said she wants to help Lawrence students find pathways to success that best suit them.

“The way the program was geared to fit me better helped me succeed to graduate on time,” she said of her time at the Lawrence Alternative High School. “That was the success of that program.”

Editor’s note: The Journal-World has been publishing profiles on candidates for city and school board offices.

While the alternative school closed in 2004, the school district is currently exploring a new way to adapt education to help students succeed. The school district was recently accepted into the Kansas State Department of Education’s school redesign program, which moves away from an approach of relying on standardized testing and instead focuses on developing personalized education plans for students.

Smith, a candidate for the Lawrence school board election this fall, said she supported the new vision for Kansas education and wanted to help install the redesign at the four local schools participating in the program.

“I’m really invested in the education of our youth,” she said.

Smith has experience working on education issues in the Lawrence district. She said she was inspired to run for the school board because of her previous work as the committee chair for Native American Student Services program, which addresses issues facing Native American students.

Smith, who is Native American, said she noticed the school board was not an active participant in the group’s meetings and she reached out to the board to nurture a relationship between the two groups. She said she wanted to make sure the school district was aware of the academic achievement disparities of Native American students and other issues they may face.

Through that work, she said, current school board members encouraged her to run for a seat on the board.

“They said, ‘Why don’t you run for school board? You started this work and you can look at the big picture for all of our students,'” she said.

While she acknowledged that the current board has done a good job interacting with the program, she wants to make sure that relationship continues and ensures the voices of Native American students are being heard.

Other issues Smith wants to focus on are school security, education funding, discipline disparities among students and exploring alternative methods of discipline.

“When I think about (student discipline), I think about looking at the whole picture of the student and maybe increasing student services for that student who may be having issues that are not necessarily related to their grades or homework,” she said.

Smith currently works for the Kansas Volunteer Commission, a state service commission that aims to provide support and funding to community-based initiatives. She serves as the Mentor Kansas director, where she provides training and education for mentoring programs throughout the state. She previously served as the volunteer director for the United Way of Douglas County.

Smith moved to Lawrence from Sisseton, S.D., when she was around 10 years old and her father got a job at Haskell Indian Nations University. She holds a bachelor’s degree in Indigenous and American Indian studies from Haskell and a master’s in geography from the University of Kansas.

She has five children; three of them have graduated from Lawrence High School, and two are currently enrolled.

Smith is one of five candidates running for the four at-large positions on the Lawrence school board that are up for election. The general election will be Tuesday, Nov. 5. Advance voting will start Wednesday, Oct. 16, and the last day to register to vote is Tuesday, Oct. 15.