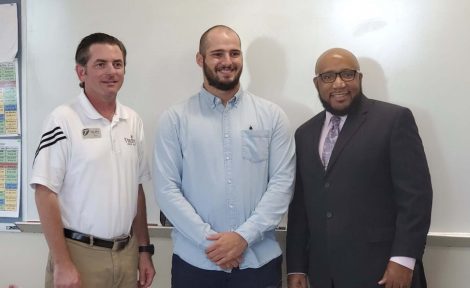 During his first year of teaching, Chad Aberle showed an ability to build strong relationships with his students and their parents, which is a sign of a great teacher, said West Middle School Principal Brad Kempf.

“What Chad did to create a culture for learning in his first year of teaching was unique,” Kempf said. “He quickly established close relationships with students and families, listening to the needs, concerns and desires they had for their children.”

That’s why the Lawrence school district on Wednesday gave him the Horizon Award, which aims to honor “exemplary novice educators in their second year of teaching,” according to a school district news release.

Aberle, who teaches science at West Middle School, was a great pick for the award because he has a strong understanding of the subjects he teaches and is able to create an inclusive environment in his classroom, Kempf said.

Carissa Miles, who worked with Aberle as a learning coach at West Middle School last year, said she noticed his connection with students too.

“Mr. Aberle’s positive presence makes others flock to him and that includes students because he takes the time to connect with them and to know a little bit about each of them,” said Miles, who is now an assistant principal at Billy Mills Middle School.

Along with teaching in the classroom, Aberle serves as West Middle School’s head wrestling coach and an assistant football coach for Free State High School.