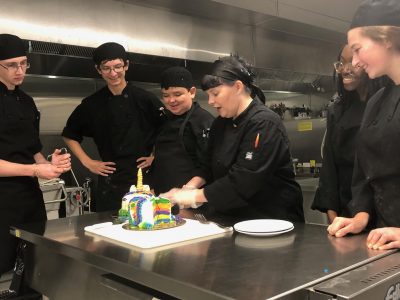 Camille Eichorn, center, a culinary instructor for the Lawrence College and Career Center, demonstrates for high school students how to evenly cut a cake. "It's all math," she said.

In just his first three months on the job at Luckyberry, Steven Wood said he’s had the two creations he made from scratch land on the restaurant’s menu. Now he’s working on what he hopes will be his third.

He said it’s an opportunity he’s been dreaming of since he was in middle school.

“I’ve always wanted to put positivity out, and cooking good food, wholesomely, was the best way I’ve found in my life to do just that,” he said. “It’s always been a passion of mine, and this (job) really opened my eyes to that.”

It’s also an opportunity that likely wouldn’t have been possible without the education Wood received through a local program dedicated to teaching the culinary arts, he said.

Wood, who is the sous chef and kitchen manager at Luckyberry, is one of the many graduates of KitchenWorks, a program by local food bank Just Food that offers the entry-level basics of the restaurant industry to high school students and adults at the Lawrence College and Career Center.

The program, which was created by local chef Rick Martin, teaches high school students or adults the basics of sanitation in the kitchen, knife skills, flavor development, making food from scratch and creativity and food design techniques in the hopes they will be able to start a career.

The adult program, which is run through local food bank Just Food, began in 2018 and offers a one-week intensive course. The high school program, which began in 2016, is through school courses that are listed as Advanced Culinary and Event Planning and Management. The classes last a full semester each. 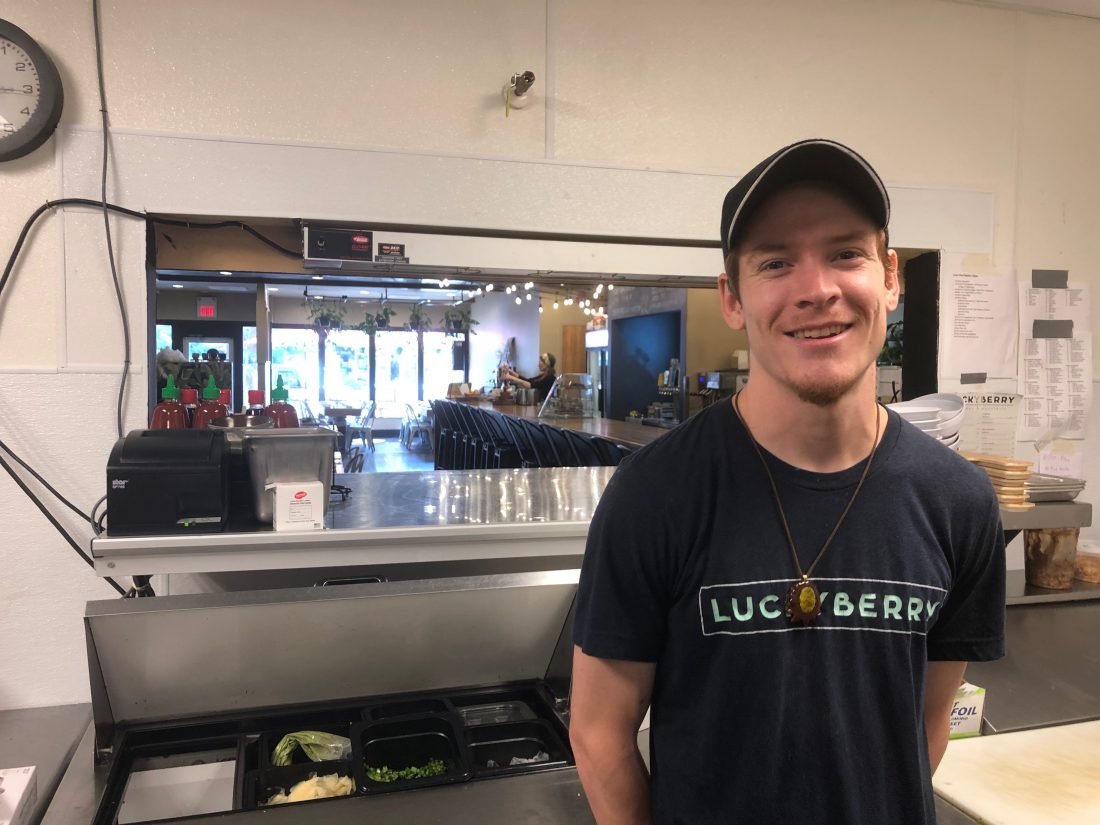 Steven Wood, sous chef and kitchen manager for Luckyberry, said he landed his job after graduating from KitchenWorks, a local program that teaches high school students and adults the skills needed to work in the restaurant industry.

Prior to Luckyberry, Wood said he worked in fast-casual restaurants, which helped him learn some parts of the restaurant industry but did not offer much outside their own food creations. But through KitchenWorks, Wood said he was able to learn and understand how to make foods from scratch.

“It’s a beautiful program,” he said.

So far, about 35 students have graduated from the program, with many filling local restaurant positions. Martin, who is part owner of Luckyberry and Limestone Pizza, said it’s a great example of the local education system providing real-life experience that can be put toward building a career.

But the students aren’t only learning how to make food, said Resa Sobandi, a graduate of the program who is now the noodle production manager for the restaurant Ramen Bowls. She said Martin’s direction in the course taught her how to be a professional in the kitchen, which can often be an intense environment.

“It’s more important on the attitude side and how to work in the kitchen,” she said of the program. “Even if you have great knife skills, if you don’t have great interpersonal skills it’s not going to take you anywhere.”

Sobandi said she was grateful for her education through the program because she had been unemployed for about two years after she gave birth to her child. Although she had no experience of working in the kitchen prior to the program, she was able to land a job with Ramen Bowls, she said.

Since joining, she has moved up the position ladder of the restaurant and now enjoys the confidence of the restaurant’s owners to lead her current position, of which she is the first to serve. She said the skills she learned through the program are put to use every day on the job.

Martin said he started the program because he previously noticed Lawrence businesses were struggling to fill entry-level restaurant positions. At the same time, he was teaching a course for Just Food that trained local residents how to make cheap and healthy meals at home. Some of the students in the training course were interested in going further, he said.

“We just weren’t getting enough people applying at our restaurants, but yet we had people at the (Just Food) who were interested in careers and making some money,” Martin said.

Although the high schools offer other food and baking courses, Martin said the KitchenWorks program is not an education opportunity for food enthusiasts looking to expand their knowledge on a hobby. Instead, these students are training for a career, he said.

“After the first semester, they are beyond entry level and ready for skilled positions,” Martin said. “When they finish their second semester, I think they are ready for management.” 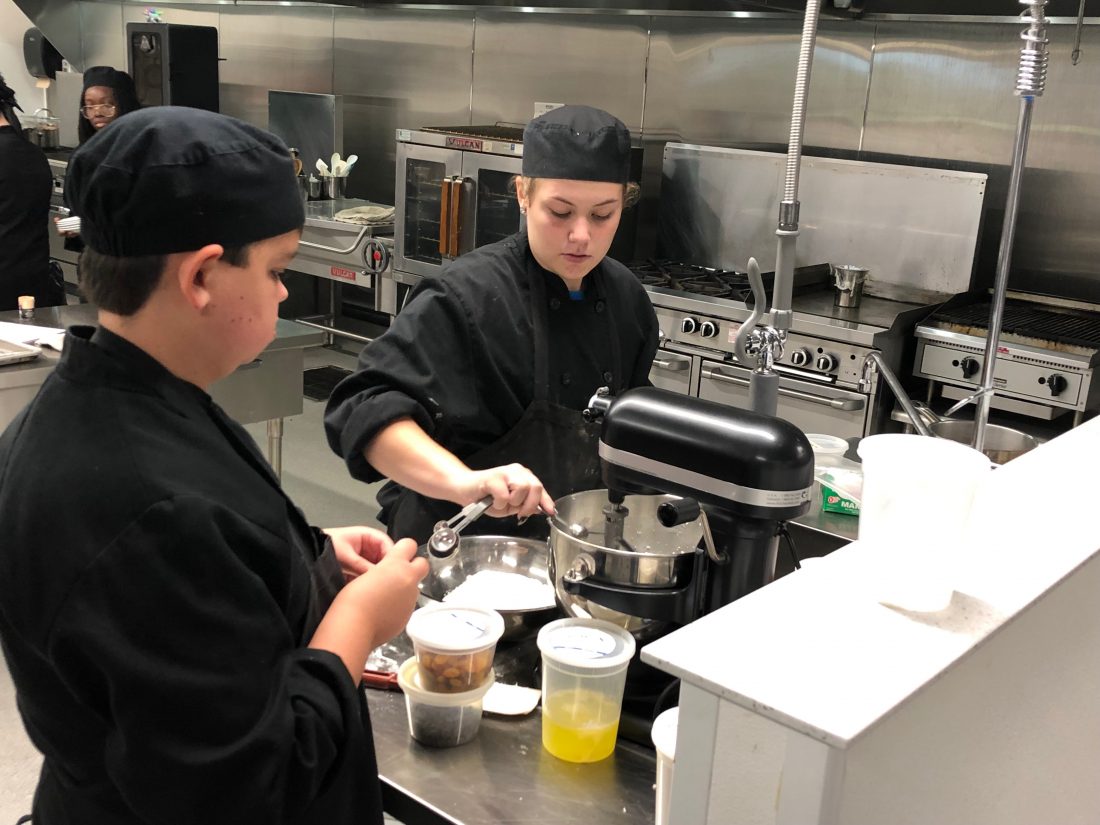 Emilie Rodman, right, a Lawrence High School senior, makes oatmeal cookies from scratch during a culinary education class at the Lawrence College and Career Center. She said she plans to work in the restaurant industry when she finishes school.

Emilie Rodman, a senior at Lawrence High School, is one of a handful of high school students participating in the program this semester. She is currently taking a baking and pastry course with chef Camille Eichorn, who has been a professional chef since 2006.

When she first joined the program last school year, Rodman said she also got the opportunity to work for Luckyberry like many other students.

“It opened up a lot of opportunities, which was what I was looking for,” she said.

Now she works as a kitchen worker for the Lawrence restaurant Fields and Ivy Brewery. She, too, hopes to one day make her own food creations, she said, specifically focusing on comfort food most often found on the gulf coast of the southeastern U.S.

“One hundred percent,” she said when asked if she wanted to pursue a culinary career. “My plan is to open my own business.”

Elizabeth Keever, executive director for Just Food, said the food bank will begin another one-week course on Sept. 23. Those who are interested can find more information at justfoodks.org.

Additionally, Martin said high school students who are interested in the program can learn more at the Lawrence College and Career Center website at usd497.org.