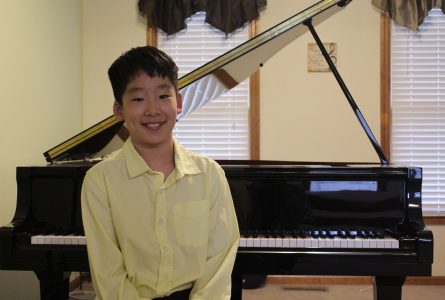 Matthew Liu, 12, sits at his family piano in his home. Liu began playing when he was 5 and will perform with the Midwest Chamber Ensemble this month.

When Matthew Liu, a Lawrence pianist, competed in the Midwest Chamber Ensemble’s youth concerto competition in the spring, he said he wasn’t nervous because he had performed in other competitions several times before.

However, this time was different. He was an 11-year-old competing with musicians up to the age of 18, said Jessica Koebbe, director of the competition.

“After hearing him perform and letting the judges know his age, everyone was blown away,” she said.

Matthew went on to win the competition, becoming the youngest to do so in its six-year history. While she knew how young Matthew was at the time, Koebbe said the judges would never have guessed.

“He caught their attention immediately because he carried himself professionally from the minute he walked into the room to audition,” she said. “His artistry and his musical sensitivity are at the highest level, regardless of his age.”

As part of the achievement, Matthew, who has since turned 12, will join the Midwest Chamber Ensemble for two concerts later this month. The ensemble is a Kansas City, Mo.-based music organization dedicated to the performance of classical music. It aims to offer young musicians the opportunity to work with local music professionals, Koebbe said. During the two concerts, Liu will perform the first movement of Mozart’s Piano Concerto No. 19.

Matthew said he was “sort of nervous” to be sharing the stage with adult performers, but his father, Gaisheng Liu, believes his son will do just fine. He said Matthew was very calm during the final for the concerto competition.

“When he plays music for a few seconds, he’s then all into the music and all the other things (disappear),” Gaisheng said. “That helps. Once he gets into the music, the nerves are just gone.”

While Matthew was happy to win the competition, he said his fascination lay in being able to see many performances of different classical music instruments, including the harp.

“I’ve never seen a harpist play,” he said. “There were different instruments (I saw) and it was the first time I got to play concerto, so it was pretty exciting.”

He joined the competition at the insistence of his instructor, Jack Winerock, who is a piano professor for the University of Kansas. Winerock, who has been Matthew’s piano instructor for about two years, said the young pianist was talented well beyond his years.

“He has a great ear, so he really picks up things very quickly,” Winerock said. “He works very hard, and he’s focused.”

Matthew started playing the piano when he was 5. His interest in the instrument began when he heard his older sister playing on the family piano. Although she moved away from practicing the instrument to focus on her academics, Matthew still practices between two to three hours a day, Gaisheng said.

Matthew said he has a deep personal connection to the piano.

“Some of the pieces I’ve played really touched me, and I’ve enjoyed that,” he said. “Sometimes when I’m sad I’ll play it, and it will follow my emotions.”

Matthew hopes to be a professional pianist one day, but he’s keeping his options open. A seventh grader at Southwest Middle School in Lawrence, he is also interested in science, technology and math.

His devotion to his passion and his work ethic have inspired his parents.

Tickets are $12 in advance and $15 at the door. They may be purchased online at www.midwestchamberensemble.org.

Matthew Liu performs on the piano

Lawrence boy Matthew Liu, who was 11 at the time, performs “The Lark” by composer Mikhail Glinka at the University of Kansas in November 2018. Liu, who is now 12, will participate in two performances in September with the Midwest Chamber Ensemble.