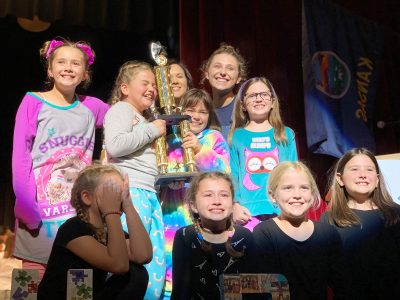 A team of dancers representing Sunflower Elementary School in the Boys & Girls Club of Lawrence's annual talent show pose with their first-place trophy on Friday, Oct. 18, 2019. Anna Meissbach, back right, served as the team's choreographer.

Dance teams from Sunflower Elementary came out on top during the Boys & Girls Club of Lawrence’s annual talent show on Friday.

The 2019 Lights On Talent Show included performances from teams representing 14 of the 15 Boys & Girls Club locations, according to a Boys & Girls Club of Lawrence news release. They danced to a mashup of songs from one boy band and one girl band. A panel of judges scored the dances in categories such as degree of difficulty, creativity, effort and overall flash.

The Sunflower team wore masks of monsters for their rendition of “I’m In Love With A Monster” by Fifth Harmony, a contemporary all-female musical group, while also mixing in clips of music from original boy band the Beatles.

“I am super proud of them,” said Amanda Montgomery, site coordinator at Sunflower Elementary. “Especially of the way that they came together. They aren’t always in the same group at school or at (Boys & Girls Club) but every time they practiced, they got better and better and became a little family.”

A dance crew representing the Center for Great Futures, the Boys & Girls Club’s teen center, came in as the runner-up. The teens performed a routine to boy band LFO and the all-female Dixie Chicks. The students of New York Elementary’s team placed third, mixing the music of boy band B2K and all-women pop rock band the Bangles.