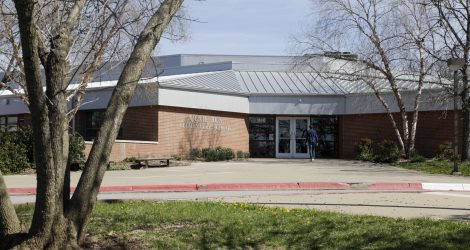 Quail Run Elementary, 1130 Inverness Drive, is one of three Lawrence elementary schools with high levels of enrollment. The school's enrollment reached 96% of its student capacity for the 2019-2020 school year.

Three elementary schools on the west side of the Lawrence school district may be a little more tight on space than other schools for the 2019-2020 school year.

At the same time, three elementary schools on the east side of the district are struggling to fill their buildings, with one school — Kennedy Elementary — not even reaching half its capacity.

While many different options may be available, picking the right one for Lawrence could be tricky, said Shannon Kimball, the only candidate who is currently serving on the board.

“If there was an obvious solution to this issue, we would have already implemented it in the last eight years,” Kimball said, referring to her time on the school board.

In data the school district recently provided to the Journal-World, three elementary schools on the western side — Deerfield, Langston Hughes and Quail Run — have filled 84% or more of their building capacity. Conversely three schools on the central and eastern side — Cordley, Kennedy and Pinckney — have only filled 58% or less of their capacity.

The data appears to confirm what many in Lawrence likely suspect: the western side of town is growing faster than other parts of Lawrence. That can be an issue for the Lawrence school district, which has distinct boundary lines that dictate which schools students attend based on where they live.

Being closer to capacity presents many challenges for a school, but the candidates all agreed one of the main concerns is class size in a single classroom, which affects the student-to-teacher ratio. Larger classroom sizes can put a strain on teachers providing education to more students and also diminish the education of students who then get less one-on-one time with their teacher.

If the community continues to grow in certain areas, the Lawrence school board may need to take action to make sure building and class sizes across the district are equitable.

Kimball said other school districts have addressed the issue by redrawing boundary lines throughout the district, which is an option the Lawrence school board is exploring through an advisory committee.

But she said there are also other options, including establishing multi-grade level classrooms, which allow two or more teachers and their classes to use a single classroom space, or creating new school building models, such as having one building serve kindergarten through third grade students and using another to serve fourth and fifth grade students.

At the moment, Kimball said she hasn’t gotten to the point that she feels confident in selecting one of those yet. She said those solutions may not even be considered if other, more creative options are presented.

“I don’t, at this point, have a favorite solution,” she said. “I’m open to any number of possible suggestions.”

The other four candidates, who are all running to serve on the school board for the first time, said they have not been able to dig into the data on the issue yet. But they all agree that school building capacities and classroom sizes are important topics.

Carole Cadue-Blackwood, who has lived in Lawrence since 1978, said she was not surprised to see the schools on the west side of town reaching higher levels of capacity. She said Lawrence has historically been growing in that direction.

“There’s new houses being built over there all the time,” she said.

To address the issue, she pointed to the advisory committee looking into boundary lines. She said it’s likely the school district will need to redraw its district map to free up space in crowded buildings.

“It’s a definite possibility the school district may need to redraw its boundaries, because that’s the way the town is growing,” she said.

Thea Perry said reducing class size is one of her priorities. She said class size in Lawrence was one of the issues that brought the state’s education funding issues to her attention and inspired her to get involved in education policy.

But Perry believes finding a solution will be difficult. She said the schools that are seeing an increased capacity level are in wealthier parts of town while the schools with lower capacities appear to be in parts of town with more low-income residents.

Perry said working with community partners on issues such as affordable housing may help alleviate the issue.

“Collaboration with other governing bodies is going to be critical,” she said.

Erica Hill also believes it will be a complicated issue to address. Redrawing school boundary lines could have unintended consequences that the school board will need to consider. One example would be splitting up students from their friends and sending them to new schools, which could affect their social and emotional health, she said.

“There’s a lot to consider, but at the end of the day we need to do what is best for the student,” she said. “We have to look at it from all different ways.”

Hill said that if elected, she would want to seriously consider what the school district’s data is showing, but she wouldn’t want to forget the human aspect. She said she would speak with teachers and students, learning how the building and classroom sizes are affecting them and considering their concerns before making a decision.

“Have we asked our kids, our students, how they would feel if they have to go to a different school away from their neighborhood? That could really have a very significant impact on these scholars,” Hill said. “Really considering all sides is important.”

Paula Smith said she also wants to hear from teachers about the issue to understand how quickly the board needs to act on it. She said she wants to reduce classroom size, but she’s not sure just yet how that can be done.

If she’s elected, Smith said she will want to look into what other school districts have done to address the issue and also consider redrawing school boundaries.

“I’m really not sure what that would look like, but that is something we should be looking (at) and asking ourselves,” she said.