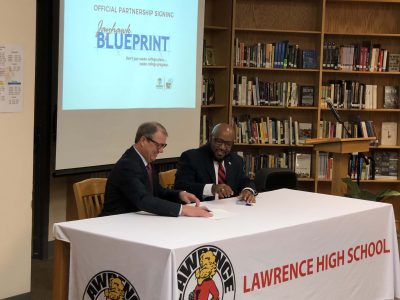 University of Kansas Chancellor Douglas Girod, left, prepares to sign a memorandum of understanding with Lawrence Superintendent Anthony Lewis for the Jayhawk Blueprint program. The partnership between the two education institutions allows Lawrence students to enroll in college courses while still in high school.

Hundreds of Lawrence students are taking advantage of a program that allows them to take several college courses while they are still in high school.

Lewis announced the dramatic increase in participating students during a ceremony at Lawrence High School where he and KU Chancellor Douglas Girod signed an official memorandum of understanding for the program.

Although the program is new this school year, the Lawrence school district and KU had been offering college courses to high school students for a number of years. The high school initially offered college English and algebra courses, but the offerings were expanded to 11 courses for the program. Lewis said the school district and the university were working to add even more in the future.

“Many of our scholars can leave our school with a high school diploma and, eventually, one year of college under their belt,” he said.

A year’s worth of college credit before arriving on campus gives students a lot of flexibility, Girod said. That could include finishing college early or exploring other courses during their four-year education.

Additionally, with KU serving as one of the premier research universities in the state, the college credits can be transferred to virtually any other higher education institution, giving students options after high school. But Girod said he wouldn’t mind if the students ended up attending KU.

“It helps keep more local students local, but really what you hope is that the program brings some kids to the university that maybe wouldn’t have thought about going to KU,” he said, noting the program could attract students who would be the first in their family to attend college. “We know social mobility is certainly tied to education level and it could really advance their prospects for the future.”

Lewis said the program was beneficial for Lawrence students because it could help them realize they are capable of attending college after high school before they get to campus.

For Jackson Theilen, an LHS junior who is currently taking the program’s American history course, the program offers an alternative to advanced placement courses, a nationwide program that also allows students to earn college credit. However, he said the Jayhawk Blueprint credits were more appealing because AP courses required students to take final exams to earn college credit.

“You’re not taking an AP class and then all of it is thrown away when you don’t do well on a test because you didn’t get enough sleep one night,” Theilen said. “I’m a lot more secure in this class than I would have been in an AP class.”