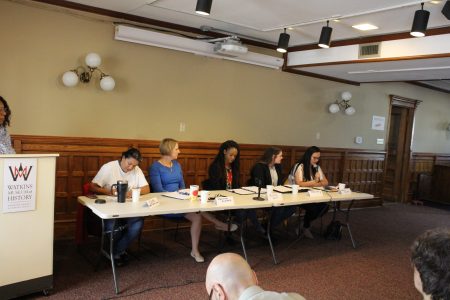 The five candidates vying for four Lawrence school board seats participate in an Oct. 5, 2019, forum at the Watkins Museum of History. From left, the candidates are Carole Cadue-Blackwood, Shannon Kimball, Erica Hill, Thea Perry and Paula Smith.

The five candidates running for the four Lawrence school board positions on the Nov. 5 ballot shared their differing views on the challenges facing the school district, including the role that school resource officers should play, on Saturday at a forum sponsored by the Lawrence chapter of the NAACP.

The five candidates at the forum, which drew about 50 people to the Watkins Museum of History, included Carole Cadue-Blackwood, a social worker; Erica Hill, a finance and operations manager for the LMH Health Foundation; Shannon Kimball, an incumbent board member who also serves as president of the Kansas Association of School Boards; Thea Perry, a school-funding activist and board president of the Lawrence Community Shelter; and Paula Smith, the community engagement and volunteer director for the United Way of Douglas County.

Most of the six questions that Lawrence NAACP President Ursula Minor asked allowed the candidates the freedom to address a wide range of issues facing the district.

One question, however, required the candidates to define the role of school resource officers, or SROs. SROs have been the subject of recent debate because of the possible intimidation of having law enforcement personnel in the school environment, especially for students of color. Cadue-Blackwood, Hill, Perry and Smith had reservations about SROs playing roles beyond that of school safety and getting involved in enforcing school discipline issues or serving as the “911 for principals,” in Cadue-Blackwood’s words.

Cadue-Blackwood also suggested that the district could network with community partners on programs to reach at-risk students.

Perry said SROs had assumed counseling roles because the district could not afford to retain or hire enough counselors earlier this decade because of state budget cuts. The district now needs to hire the necessary professional staff instead of depending on SROs, she said.

Hill agreed, saying the role of SROs should be limited to school safety.

“If SROs are used by administrators and teachers as an extension of discipline, I do not support SROs in schools,” she said. “If, however, they are used for their intended purpose, which is keeping our schools safe, SROS could be helpful.”

Smith said SROs should be replaced by robust restorative justice programs. Those programs, such as the one first introduced in the district at Liberty Memorial Central Middle School, find alternative ways to reach troubled students and involve students in the discipline of their peers. Smith said her opinion on SROs was informed by a visit to a facility for disruptive youth. The visit convinced her that no child should be placed behind bars and that the district should look to develop out-of-school resources to help troubled students.

Incumbent Kimball said there was no simple yes or no answer regarding the value of SROs. The district has charged a committee, which includes students, to study the role of SROs and report to the board, she said.  Kimball added that SRO salaries should be the responsibility of the Lawrence Police Department and not the school district, which is having trouble attracting and retaining teachers and paraprofessionals because of funding constraints.

Kimball returned to the concern of attracting and retaining classroom staff in a question regarding the biggest challenges confronting the district. Teacher retention was a problem not only because of state funding issues, but also because fewer college students across the nation are opting for teaching careers and experienced teachers are leaving the field for better-paying jobs, she said. To address the issue, she said, the district has to be more creative.

One creative measure the district should use to reach more teaching and paraprofessional candidates would be the use of social media, Cadue-Blackwood said.

She also said the district should take action to address the greater number of suspensions meted out to students of color, which a 2017 district study found to be the case. A greater use of restorative justice practices would be an effective tool in narrowing the gap, she said, giving as an example that some of the student-involved exercises resembled Native American tribal circles.

Perry, who said she became involved in politics as a community activist fighting the budget cuts of former Kansas Gov. Sam Brownback, said the district faced a big challenge in making up for those years of austerity. One way to move beyond the Brownback years might be to invest more in teachers rather than technology, she said.

Hill also identified the academic achievement gap between white students and students of color as a challenge and said more community partnerships and mentoring opportunities with community businesses and organizations should be part of the solution. Mentoring should be offered on all grade levels, not just in high schools, and should provide all students at least one adult role model outside of the home, she said.

Advance voting for this year’s city/school board election will start Wednesday, Oct. 16, and the last day to register to vote is Tuesday, Oct. 15. Election day is Tuesday, Nov. 5.