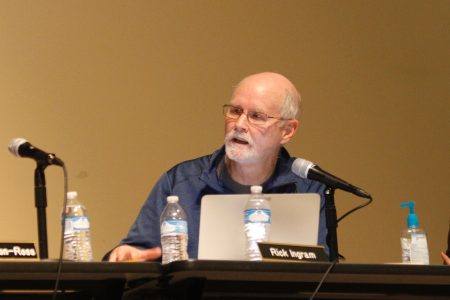 Lawrence school board member Rick Ingram, who has been advocating for years to push back high school start times, speaks to other board members about the issue during the board's meeting on Monday, Nov. 25, 2019. Ingram said the board needed to act on the issue rather than "kicking the can down the road."

The Lawrence school board will wait at least another two weeks before making a decision on pushing back start times for its high schools next school year.

After a discussion on the topic during its meeting Monday, the board came to a general consensus to consider an option to change the start times at Lawrence and Free State high schools from 8:05 a.m. to 9 a.m. for the 2020-2021 school year. The board directed school district staff to bring additional research on the proposed start time change and a recommendation for the board to vote on during its next meeting on Dec. 9.

But board member Rick Ingram, a professor of psychology at the University of Kansas who has been pushing for a change to start times since 2015, appeared frustrated with the board’s decision to delay. He said the board has been considering the topic for several years and suggested the board should have taken action on Monday.

“My perception of this is that we keep kicking the can down the road,” Ingram said. “I think we need to move on this.”

The school district has been investigating for several years the issue of students starting later in the morning so that they could be better rested.

Its current investigation into the possibility began in 2018. After almost a year of research, the school district found that parents and students preferred moving the start time from 8:05 a.m. to 8:30 a.m., but faculty preferred the current schedule.

The split in preference led to the school district spending another year on the issue with the creation of the Late Start Time Implementation Committee in early 2019.

Normally, the high school day runs from 8:05 a.m. to 3:10 p.m., with a few classes held during a 7 a.m. “zero hour.” (For the current school year, classes actually begin at 8 a.m. rather than 8:05 a.m. That change was made to add extra classroom time after construction delays at Lawrence High School caused the start of the school year to be pushed back.)

The committee presented its findings to the board on Monday, but it did not provide a recommendation on which option to pursue.

During the meeting Monday, Deputy Superintendent Anna Stubblefield, a member of the committee investigating the change, said the district’s transportation service provider estimated that changing the start time to 8:30 a.m. could cost up to an additional $261,000 for the school district. But a change to 9 a.m. would save the school district about $109,000 because it would allow the school district to use fewer buses and drivers.

However, the school district would need to increase its cost by $145,000 if it chose to begin busing students to the zero hour classes, which it does not currently do.

While some board members said they were interested in the idea of the 9 a.m. start time, they said they still needed more information before supporting it.

Board member Shannon Kimball said she wanted to wait to give students more time to understand what the board is considering. She said a comment from a Free State senior, who argued the change would push the school day back and hurt students who had jobs after school, made her realize students may need more of a chance to speak on the issue.

“I do not want to dismiss those concerns,” Kimball said. “I think the real-life impact on some of our students is an important thing to consider.”

But Ingram and board member Kelly Jones said the school district has gauged student opinions on the issue at least three times in recent years. Jones said she didn’t want to make the district administration ask students questions that have already been asked.

Superintendent Anthony Lewis, noting that some of the board members appeared to be split on supporting the change, said the school district would be able to do whatever the board decided.

“The litmus test for me has been and always will be ‘is this decision we’re about to make in the best interest of students?'” he said. “If the answer is yes, then we can make it work and we will do everything we can to make it work.”