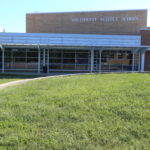 Two students at Lawrence’s Southwest Middle School were caught with pocket knives at school on Monday.

Julie Boyle, spokeswoman for the school district, told the Journal-World Tuesday that the students were caught with the knives after a police officer learned they were carrying them at the school, 2511 Inverness Drive. Boyle said the knives were not involved in an incident at the school. No one was harmed.

“A police officer informed the school that during an investigation of a non-school-related matter, the officer learned the students were carrying pocket knives,” she said in an email to the Journal-World.

Additionally, Boyle said a Lawrence Police Department investigation into the incident found nothing to substantiate rumors that the students made a threat toward the school’s staff.

Lawrence school district policy prohibits students from carrying weapons, including knives, on school property. Southwest Principal Kristen Ryan said in an email to parents Monday that she discussed the issue with the parents of the students involved and has begun taking disciplinary action.

In the email, Ryan asked parents to speak to their children about items that are inappropriate to bring to school and the seriousness of making threats.

“These behaviors are not conducive to the safe and supportive learning environment we seek to provide all of our students at Southwest,” Ryan said.