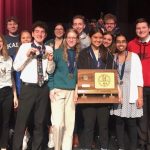 Free State High School took first overall at the Kansas Speech and Drama State Championship on May 4, 2019. Several of the students who participated are pictured in this contributed photo.

The Free State Firebirds are state champions in speech and forensics — for the first time in the school’s history, according to the team’s coach.

Free State coach Kelly Thompson told the Journal-World via email that teams are allowed to enter up to 16 qualified entries. Ten of the Firebirds’ entries made it to the final round, meaning they placed in the top six, he said.

Lawrence High coach Jeff Plinsky told the Lawrence school board at its Monday meeting that the program has records from about 1987 on. In the time since, LHS has had, at most, five entries qualify for the national tournament, he said; this year, 18 have qualified.

In addition to the National Speech & Debate Tournament, to be held June 16-21 in Dallas, LHS qualified students for the National Catholic Forensics League’s Grand National Tournament, which will be May 25-26 in Milwaukee.

Free State qualified 11 events for the National Speech & Debate Tournament. The Firebirds also qualified in 13 events in the National Individual Events Tournament of Champions, or NIETOC, which was held May 10-12 in Omaha, Neb.

“This is the most in school history and, as best I can deduce, is the most that a Kansas school has ever qualified,” Thompson said via email. At NIETOC, junior Ian Haas placed 34th in Informative Speaking and senior Spencer Yost-Wolff placed 35th in Original Oratory, Thompson said.

LHS is raising funds through the Lawrence Schools Foundation to get to nationals. That fundraiser is available online by visiting lawrenceschoolsfoundation.org, clicking “Donate” in the upper right corner and selecting “LHS Debate” as the designation.

Below are the students from each school who placed in the top six in their events at the Class 6A Kansas state championship, which was held May 4 at Olathe East High School. An asterisk (*) indicates that the student has taken first place in a state speech championship event at least once before.