Adaptive triathlon gives all students a chance to shine 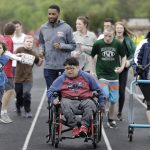 Adaptive physical education students and peer volunteers head to the finish line in a track event during the second annual Pat Grzenda Triathlon Wednesday, May 1, 2019, at Lawrence High School.

Gracie Flanagan was having so much fun Wednesday morning running in the triathlon at Lawrence High School that she crossed the finish line three times.

Flanagan, 17, was one of about 45 secondary adaptive physical education students in the Lawrence school district competing in the event, which included swimming, stationary cycling and track.

As the name suggests, adaptive physical education refers to the process of adapting P.E. activities for students with different abilities. 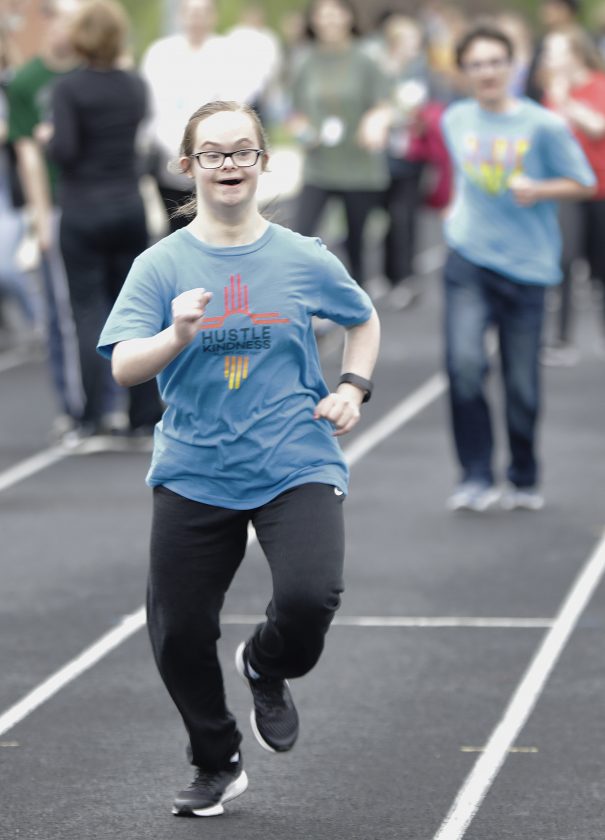 Last year she was totally overwhelmed when she learned the event was in her honor.

“Brad asked me to come to watch,” Grzenda said. He didn’t tell her he had named the event after her. She just showed up to cheer.

Swimming was Flanagan’s favorite part of the triathlon. She stretched just before jumping into the pool. Her parents, Kim and Shane Flanagan, were on the sidelines cheering. She hadn’t asked them to come, but said, “I’m glad they’re here.” 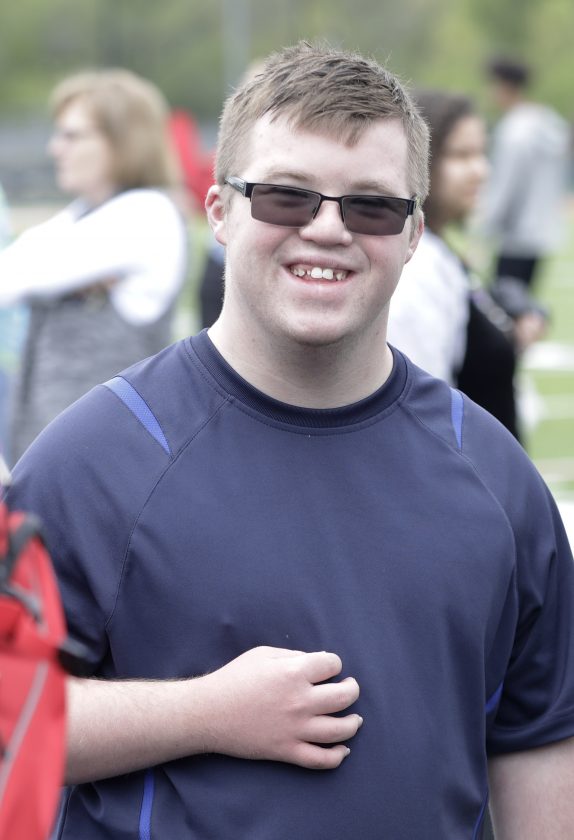 Nolan Smith, 18, after completing all three events in the triathlon, conveyed a sense of accomplishment.

“I did really well,” said Smith, who is the manager of the Lawrence High School baseball team.

When asked what he did to prepare for the day, he had a no-nonsense reply: “I put on my shirt and my shorts.”

Rachel and Grant Lechtenberg were on hand cheering for their 14-year-old twin sons, Ford and Finnigan. The boys’ service dogs, Poppy and Simba, watched too.

“I was a fish,” said Finnigan, who enjoyed the swimming part of the triathlon. He didn’t care much for the running. Students had the option to participate in all three or just one of the events. 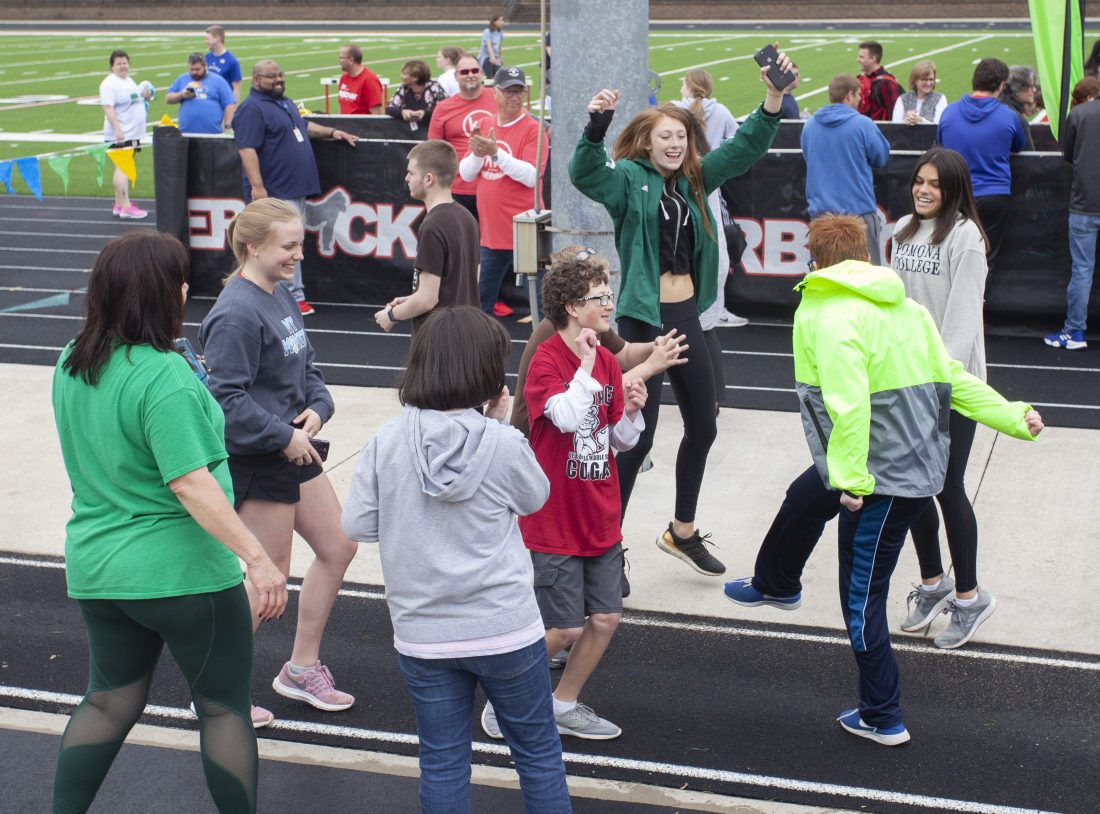 Participants and volunteers hold a spontaneous dance at the side of the track during the second annual Pat Grzenda Triathlon for adaptive physical education students, Wednesday, May 1, 2019, at Lawrence High School.

The plan was to swim four laps, bike for 8 minutes and run one or two laps around the track, Savage said. But everyone did what they could.

“Everybody gets something for working hard,” Savage said.

“Look, no hands,” said Anthony Lewis, the district’s superintendent, after spontaneously hopping on a bike, dressed in a suit and tie. He was encouraging students on either side of him. Before becoming an administrator, Lewis was a special education teacher.

“Look at the students’ faces,” Lewis said, after getting off the bike. “This is why we do what we do.”

One of the reasons for organizing the triathlon was to promote healthy lifestyles and lifelong fitness, said Stoll, who is also the Lawrence High School baseball coach.

A.J. Sanders, 16, said his favorite part of the event was running and being with his friends.

Following the event, like Olympians, the students were called forward one by one to stand on the podium and receive a medal presented by Grzenda and Lewis — and to take in the loud cheering from a room full of fans. 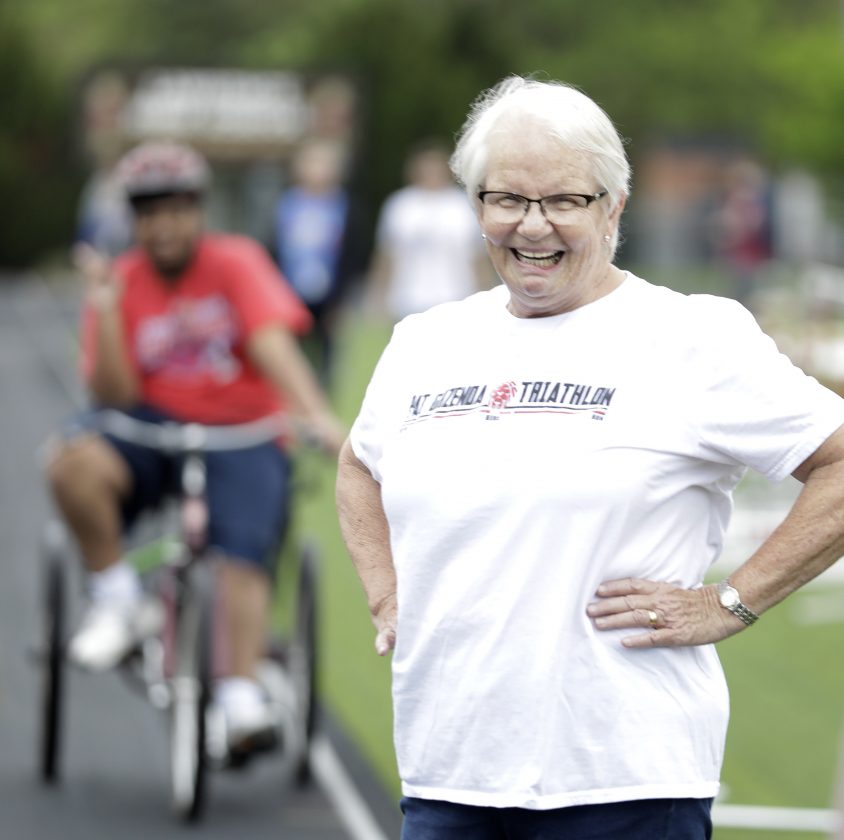 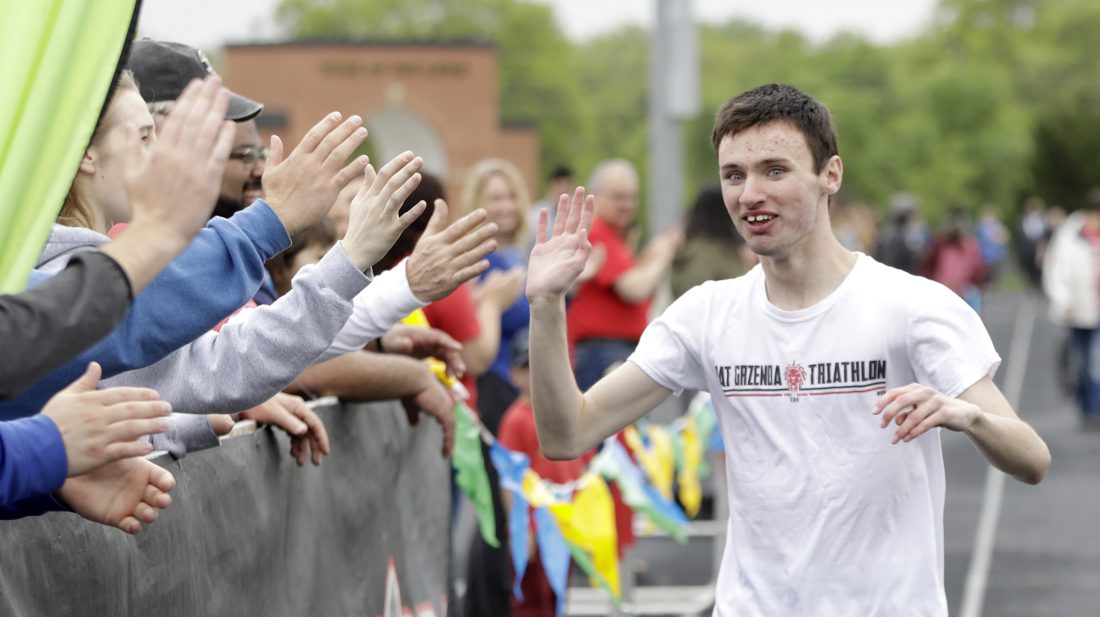 Free State High School student Ryan Eisele, 17, is greeted by people cheering him on at the finish line of a track event at the second annual Pat Grzenda Triathlon for adaptive physical education students, Wednesday, May 1, 2019, at Lawrence High School.