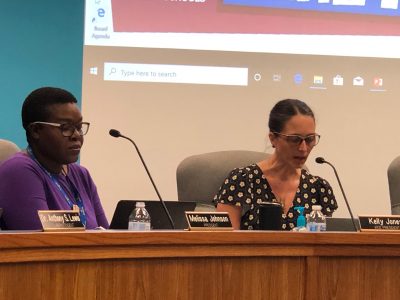 Lawrence school board vice president Kelly Jones, right, reads a proposed resolution that expresses the board's opposition to law enforcement agencies using its schools as a tool to detain undocumented immigrants. The board unanimously approved the resolution.

During her work as a social worker, Lawrence school board vice president Kelly Jones served a family that was afraid of sending its child to school because of fears of the possibility of being detained by immigration authorities, she said.

That family’s experience is one example of why the school board on Monday unanimously approved a resolution that aims to express the school district’s opposition to the U.S. Immigration and Customs Enforcement agency using schools as a tool to detain and deport undocumented immigrants.

“Following what’s been going on nationally, this particular family had a lot of fear,” Jones said. “I want to communicate to Lawrence Public Schools and families that we want them there.”

The resolution specifically states the school board “objects to Immigration and Customs Enforcement making any attempt to utilize the public schools to interview students or otherwise gather information on potentially undocumented students and families.”

Noting that the U.S. Supreme Court has ruled undocumented immigrants are granted the right to public education, the approved resolution states that the school board is opposed to the agency taking any action to interfere with its students’ education and it would take “the appropriate action” to protect students and their families.

Board member G.R. Gordon-Ross said he originally did not see the need for the resolution because it does not create new policies. But he said he changed his mind after his teenage daughter told him a story similar to the example shared by Jones.

“I was conflicted,” Gordon-Ross said. “We were having a conversation and she brought up the exact same points (Jones) brought up as to why this resolution is important … That really changed my thought process.”

The school board’s action on the issue comes a little more than a week after local activists organized a rally and urged Lawrence officials to approve ordinances aimed at protecting immigrants, including measures that would restrict the Lawrence Police Department from cooperating with Immigration and Customs Enforcement.

In other business, the school board gave initial approval to its proposed 2020 fiscal year budget, which coincides with the 2019-2020 school year.

The proposed budget includes a 0.784 mill levy decrease for a total mill levy of 53.643. That means the owner of a $200,000 home will pay roughly $18 less in property taxes to the school district next year.

Johnson previously said the school district expects to only have about $105.4 million to spend, which is about $4.3 million more than than last year. The influx of spending is funded by increased state funding of about $4 million and increased funding from local property taxes of about $300,000.

With the approval, the proposed budget will be published for the public to view. The board will consider giving final approval during its Aug. 12 meeting after it holds a public hearing.